New York Knicks center Joakim Noah has been suspended for the rest of the NBA season, and more games next season, for violating the anti-drug program.  Noah, who had been battling various injuries the past 2 seasons, tested positive for using the SARM LGD-4033. 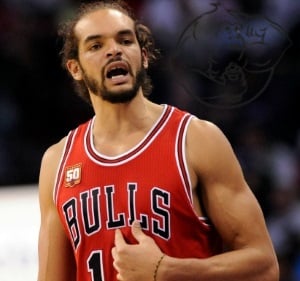 Joakim Noah has a very interesting background.  His father was a professional singer/tennis pro from France and his mother was Miss Sweden. He also is the grandson of a professional soccer player.   Although he was born in NYC, he spent most of his childhood in France, before moving back to the States at 13 years old where he excelled at basketball and was offered a scholarship to the University of Florida.

His eccentric look and his energetic play made him one of the most exciting professional basketball players to watch.   He was drafted with the 9th pick in the 2007 NBA draft by the Chicago Bulls and has 2 NBA All-star appearances, as well as an NBA Defensive player of the year award to highlight his career.  He has also done a lot of service in his community, having won the Walter Kennedy Citizenship Award in 2015.

Noah's body began breaking down the past couple seasons.   In his final season with the Bulls, he had torn and sprained left shoulder which he overcame, but re-injured it later in the year and had to have surgery.   Last summer, he signed a 4 year $72M contract with his hometown New York Knicks, but his season was a disappointment, as he only averaged 5 points per game.  To add to his misery he had to have surgery on his left knee in late February, to remove a loose body, causing him to miss more games leading up to his suspension.

During his time away injured, it was announced on March 25th, that he would be suspended for 20 games for testing positive for the SARM LGD-4033.  Since the Knicks are essentially out of the playoff hunt, this would mean he would miss the final 10 games of the current season and the first 10 games of next season.  However, since he is injured, the NBA may make him serve more time as being injured may not count towards his suspended games.

Though, this is not the first time an athlete has been busted for the SARM LGD-4033.  The University of Florida QB Will Grier was also thought to have failed for the same drug back in 2015.

LGD-4033 is a selective androgen receptor modulator (SARMS) which binds to the AR (androgen receptors) with high affinity and selectivity.  It was developed to treat muscle wasting associated with cancer, and other illnesses, and age-related muscle loss.   You can read more about LGD here.

It would make sense that Noah would use LGD since he has been struggling with injuries the past couple seasons, and he was under a tremendous amount of pressure by the media and fans to live up to his monster $72M contract.

Noah apologized and said that he made a mistake, and did not intentionally or knowingly violate the rules.  The NBAP has said Noah was honest and cooperative.

He will likely end up forfeiting upwards of $3M of salary in the process, and further infuriate fans who expect him to help the struggling team next season.   It will be interesting to see if he can get his career turned back around.