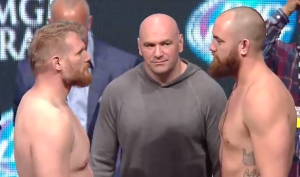 All competitors are tested for drugs for UFC events in Nevada on fight night. Browne and Barnett have already been drug-tested at least a dozen times before their UFC 168 fight.

Browne said he is supporter of the World Anti-Doping Agency and what they do, and making sure this fight is on the straight and narrow and fair. He added he completely agrees with what they're doing and said but just because my opponent got popped for anabolic steroids or performance enhancing drugs before, he doesn't feel like he should have to suffer for that. The American mixed martial artist who competes as a heavyweight in the Ultimate Fighting Championship is ranked the #9 heavyweight in the world by Sherdog as of October 2013. Browne made his debut at The Ultimate Fighter: Team Liddell vs. Team Ortiz Finale against James McSweeney and won the fight via TKO at [4:32] of the first round. Browne faced Alistair Overeem on August 17, 2013 at UFC Fight Night 26 and earned his third Knockout of the Night bonus award.

Barnett, on the other hand, said he is willing to prove he's not using banned substances. The UFC fighter recently became the first mixed martial artist in Nevada to undergo WADA-certified random drug testing as part of a condition of his latest license to fight in the state. Barnett is subjected to enhanced, intensive, weekly testing by the WADA lab at the expense of himself or UFC and that he would also be subjected to random testing by the Nevada State Athletic Commission through December 31, 2014 to be paid by him or the UFC.

Josh Barnett has always maintained that his failed tests in 2001 and 2002 were because of the use of supplements that were later reclassified as anabolic steroids. He has also maintained that his 2009 test was likely because of contaminated supplements. Referred to as "The Warmaster", Barnett remarked he now avoids supplements because of the past issues and doesn't intend to file a petition before the commission for a therapeutic-use exemption for testosterone replacement therapy, despite his age. He went on to add there would be no further excuses moving forward and added no one is giving him anything under the table and putting things in my system, this is his responsibility.

The American mixed martial artist and professional wrestler who currently compete in the Heavyweight division of the UFC won the King of Pancrase Openweight Championship and was a finalist in the Pride 2006 Openweight Grand Prix and the Strikeforce Heavyweight Grand Prix Championship. He is a former UFC Heavyweight Champion and ranked the #6 Heavyweight fighter in the world by Sherdog as of September 2013. He made his UFC debut at UFC 28 on November 17, 2000 against 6' 10" Gan "The Giant" McGee where he won via TKO in the second round.

0 0
Previous ArticleIGF-1 lr3 the Anabolic PowerhouseNext ArticleGHRP-6 : What is it and what does it do?