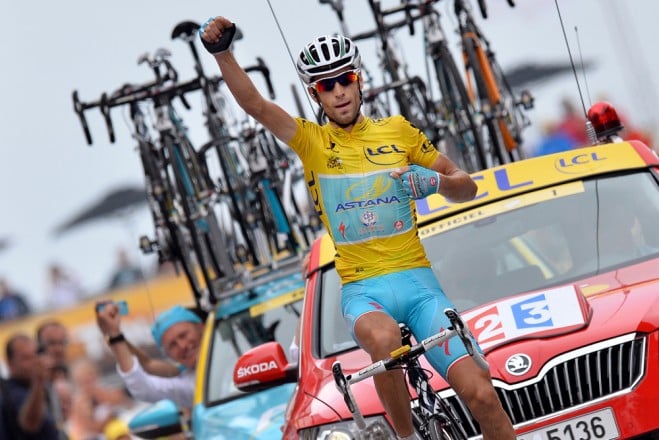 Le Monde newspaper quoted Nibali as saying that his first reaction when learning of this is rage. Nibali quoted this is an isolated case and remarked we are speaking of two brothers, it happens in families, outside of the team. The Tour de France 2014 winner said it is ugly because the entire team must pay the consequences, even if it has nothing to do with this story. Nibali also said there will probably be sanctions, but he thinks it is the concerned riders that should pay, not us, because they are the ones who did it, not us.

Nibali went on to say that the followers should not consider his Tour de France victory ride suspicious and added that he has always been transparent and never avoided the subject of doping, even when he was at team Liquigas. The cyclist added things have changed thanks to the anti-doping agencies and said it is a good thing that they do more and more controls. The Italian professional road bicycle racer insisted that the doping problems of Team Astana will not prevent him from defending his Tour de France title next year.

The 29-year-old Sicilian added he does not think there are big problems for Astana’s license and added that there is great serenity in the team in terms of my way of racing and my sporting seriousness in these years. Nibali added he would not have had the opportunity to win the Tour de France 2014 without cycling's improved anti-doping tests. The 29-year-old said his victory at the 2014 Tour is seen as proof that professional cyclists can win without cheating. Nibali also disclosed that he still has many ambitions left in the sport and some way to go to match the achievements of the likes of Fausto Coppi, Gino Bartali, and Felice Gimondi.

In the last two months, Maxim and Valentin Iglinskiy and Ilya Davidenok tested positive for banned drugs. The Iglinskiy brothers tested positive for Erythropoietin (EPO) and Davidenok tested positive for an anabolic androgenic steroid. Maxim Iglinskiy played a critical role to help Vincenzo Nibali win the Tour this July. The doping issues of Astana were termed by the UCI, the world governing body of cycling, as an extremely serious situation that reflects poorly on the professional cycling team and its license. The UCI has asked the license commission to review the WorldTour status of Team Astana, which would now have to offer explanation in the coming month based on the commission’s ethical criterion.

In 2013, the commission withheld the licenses of Katusha for similar problems though it was later ruled by the Court of Arbitration for Sport (CAS) that the UCI could not do so and the CAS allowed Katusha to race in the top tier for 2013. In 2008, Tour de France organizer ASO barred Team Astana from participating in its race due to doping problems in the previous year.