Nicholas William "Nick" Calathes, who currently plays for the Memphis Grizzlies of the NBA, has called the 20-game suspension on him as 'unfair.' Nick Calathes was suspended less than a day before the Grizzlies started their playoff series against the Oklahoma City Thunder and his suspension would carry into the 2014-15 season. 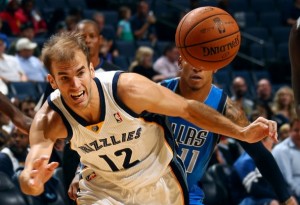 A 25-year-old rookie reserve, Calathes averaged 4.9 points and 2.9 assists in 71 games this season. The Greek-American professional basketball player played his college basketball at the University of Florida. Calathes graduated as the leading high school basketball scorer in the history of Seminole County. He was considered one of the top play-making guards in college basketball and broke the Florida school records for assists and assists per game in each of his first two years. Nick Calathes was the SEC Newcomer of the Year and the SEC co-Freshman of the Year in 2008 and was ranked third in Florida school history in career assists after just two years.

The former Florida Gator and Lake Howell High standout tested positive for Tamoxifen (Nolvadex), which is used by athletes as a post cycle therapy to reduce or treat estrogenic side effects. Medically prescribed for treating breast cancer in women, this drug also has the ability to increase the production of testosterone in the body and enhance the bioavailability of steroids used in a steroid cycle. Tamoxifen is also on the banned substance list of Major League Baseball and International Olympic Committee.

There is no evidence of testosterone or performance enhancing drugs such as anabolic steroids in his test results.

Calathes remarked he deeply regrets his actions and apologize to his teammates and the organization for his poor judgment. He added he never took any medication whatsoever for a performance-enhancing reason and he doesn't agree with this outcome, and he will come back a better player and person when he returns.

The Memphis Grizzlies point guard is expected to challenge the suspension and mount a defense that would include filing for an expedited grievance to be heard within 10 days. Calathes’ attorney David Cornwell said the drug was an over-the-counter supplement to treat a private but common medical condition and the NBA rejected it because it doesn't require a prescription.

NBPA acting executive director Ron Klempner also called the suspension "a true injustice" and remarked our collectively bargained program failed this player and this case will certainly be recalled when we return to the bargaining table. He added we will file an appeal in the meantime and allow the process to run its course.

Meanwhile, NBA executive vice president and general counsel Rick Buchanan has come to the rescue of the anti-doping program of the league. He remarked you are responsible for what’s in your body and that is the only way we can run the program in a fair way, fair across all players and all teams.

Veteran point guard Beno Udrih will take the place of Calathes for Grizzlies that finished the season as the seventh seed in the Western conference.