Matej Toth, the reigning Olympic and world champion in the men's 50-kilometer race-walk, has been suspended by the world governing body of athletics over an alleged breach of anti-doping rules. 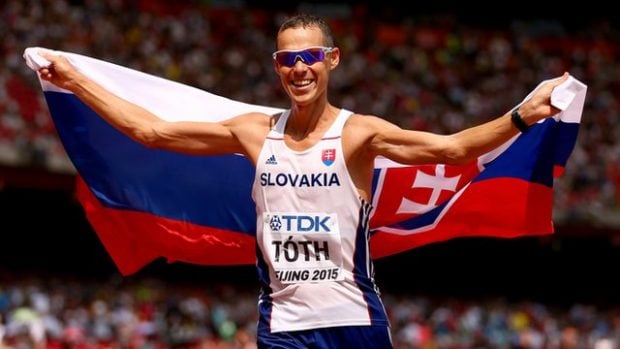 It was announced by Athletics Integrity of the International Association of Athletics Federations that the Olympic walk champion has been provisionally suspended due to irregularities in his biological passport. The Slovak race walker remains suspended until a final verdict is reached on his case. The IAAF's Athletics Integrity Unit said Toth will remain suspended pending the outcome of his case. It was further added that the AIU will refrain from further comment until a final decision has been made as is normal process, and in order to protect the integrity of the case.

Toth faces a potential doping ban of four years. This doping news would be a big blow to race-walking as the game was already reeling from a string of doping bans for Russian walkers.

Previously, Matej Toth had spoken out against doping and lauded the idea of the Russian team being barred from last year's Rio Olympics. Toth had even remarked that he will not compete at the World Race Walking Cup in Cheboksary due to the doping scandal involving many Russian walkers coached by the now suspended Viktor Chegin. Toth made his comment after news emerged that Alexander Yargunkin, the only Russian walker whose name was on the startlists here for the 50km event, would not be competing due to a positive doping test for Erythropoietin (EPO). Toth had also commented that they have too many doping rules violations as mostly all Chegin’s group tested positive for doping and also had remarked that he was so sorry to say that but he is sure that our competition was much cleaner than with participation of Russian walkers.

Toth beat Jared Tallent to gold in the 50km race walk at both Rio Games last year and the 2015 world championships, but the Australian has always believed his friend was clean. The 34-year-old Slovakian remarked he was shocked by notification of the IAAF and suffering mentally and physically as a result.

Tallent has not made any comment on the Toth doping case and it will be tough for him to hear after retrospectively received his London 2012 gold medal after Russian winner Sergey Kirdyapkin was found to be a drug cheat. Tallent will receive a second Olympic gold medal years down the line if IAAF conclude Toth's explanation is insufficient and target him for doping.

Canadian race walker Evan Dunfee, who finished fourth at the Rio Olympics, remarked he believes his former training partner is a clean athlete.

A journalist by education, Toth took Slovakia's first ever gold at the championships when he won the gold medal in the 50 km walk at the 2010 IAAF World Race Walking Cup and at the 2015 World Championships. Toth was the 2006 Slovak Athlete of the Year and won the first Slovak Olympic medal in athletics when he came first at the 2016 Olympic Games in 50 km walk.