Indian wrestler Yogeshwar Dutt has refused a medal upgrade from the 2012 London Olympics after a Russian wrestler's sample tested positive years after his death in a car crash. 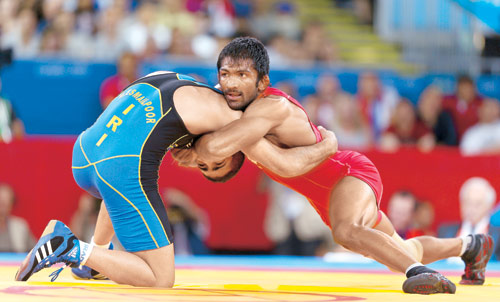 An official confirmation on whether Yogeshwar would get the silver is still awaited as dope test of the Indian from the 2012 Games is yet to be cleared before he could be handed the upgraded medal.

Yogeshwar remarked that the family of Besik Kudukhov – a four-time world champion and two-time Olympic medalist – should keep the silver medal. Kudukhov's samples were recently re-tested and were found to have contained banned substances after which the International Olympic Committee (IOC) stripped him of his medal. In a tweet, the Indian wrestler said Kudukhov's family should keep the silver medal, saying it will “keep their honor intact.” Dutt added he has utmost respect for the Russian wrestler whom he considered his friend. Yogeshwar acknowledged Besik as a “great” wrestler and said sympathy towards the deceased and his family is paramount for him.

The Indian wrestler had lost to Kudukhov in the opening round of the London Games but became eligible for the repechage rounds and eventually managed to win a bronze since the Russian went onto reach the final. The rules stipulate the bronze medalist who fought in the repechage round that involved the disqualified wrestler would get the medal upgraded in case of a disqualification. Wrestling provides two bronze medals.

Yogeshwar Dutt joined Anju Bobby George as two Indians who have benefitting from the retrospective testing of the World Anti Doping Agency (WADA). Long-jumper Anju’s silver medal at the 2005 World Athletics final in Monte Carlo was replaced in 2014 by gold after the winner, Tatyana Kotova of Russia, was disqualified for doping. Anju had also moved up in 2013 one place to fourth in the long jump results of the 2005 Helsinki World Championships where Kotova lost her silver after her sample turned positive in re-tests conducted by International Amateur Athletics Federation (IAAF).

It was recently reported that Dutt could get the gold medal after reports circulated in the media that top-place finisher in men's 60kg freestyle -- Togrul Asgarov -- tested positive. It was reported by media that Asgarov had tested positive for consuming performance enhancing drugs. The United World Wrestling (UWW) however rubbished such reports and remarked 2012 Olympic gold medalist Togrul ASGAROV (AZE) has never been in violation of UWW's anti-doping policy contrary to news reports.

The Indian freestyle wrestler won a gold medal at the 2014 Commonwealth Games and was awarded the Padma Shri by the Government of India in 2013. At the 2014 Commonwealth Games, Yogeshwar won the gold medal in the men's 65 kg freestyle category by defeating Jevon Balfour of Canada 10–0 in the finals. Dutt won the Gold in the 65 kg freestyle wrestling category after he defeated Zalimkhan Yusupov of Tajikistan in the final at the Asian games 2014. His bronze medal in the Men's freestyle 60 kg made him only the third Indian wrestler to win an Olympic medal after K D Jadhav in 1952 and Sushil Kumar in 2008 and 2012.