Yet another steroid ring was busted last week, based out of Broome County, New York (central New York State). However, this time it was ten men who were raided last Wednesday morning, and they are facing prosecutions in federal court this week.  Moreover, investigators working in collaboration with the U.S. Postal Service have additionally charged half of the men with international money laundering.  This bust is part of the Drug Enforcement Administration's (DEA) nationwide crackdown on so called UGL's (underground labs). 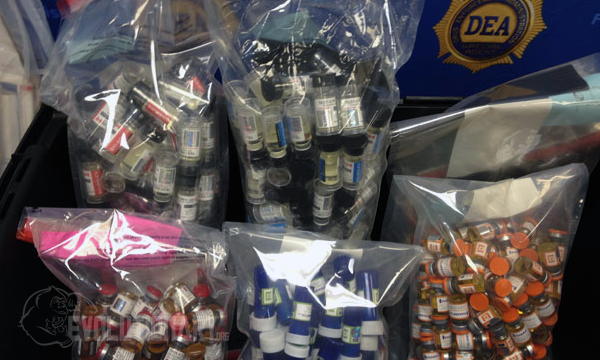 What are UGL's and how they work
Unlike official pharmaceutical labs, which are kept sanitary and under tight supervision, underground labs are not subject to any kind of sanitary controls or regulations.  In fact, any person can easily set up their own lab in their bathroom or garage at home by simply aquiring the materials needed to brew steroids.

The amount of underground labs is unknown, but with all the demand for anabolic steroids around the country, there will always be a market for that business.  Consequently, we will continue to see more of them pop up as many get busted.

History of UGL (Underground Labs)
Interestingly, the non-medical use of anabolic steroids has existed since bodybuilding's pre-golden age back in the 50's and 60's, and ever since there has been a growing demand on the black market for these performance enhancing drugs.  However, ever since the first President Bush signed a bill making anabolic steroids illegal in 1990, law enforcement has worked at combatting its production and distribution.  Nevertheless, the past five years have been a boon in the underground steroid market because they can be made very quickly.

The Broome County case
As mentioned above, the ten gentlemen busted in this latest ring could face up to 10 years in prison, if convicted.  The allegation was that this steroid ring has been operational for the past 4 years, and LE uncovered steroid labs that were in various stages of production and packaging of materials.  As a matter of fact, this is all part of the Sept 1 crackdown dubbed "Operation Cyber Juice," which has now spanned over 20 different states in strikes.

The dangers of UGL steroids
Unfortunately, these underground labs have been found to be filthy, and there have been some labs where the oils were made in the bathtub, hence the name 'bathtub gear.'  As a result of such unsanitary conditions users could face infections and other problems when injecting these compounds.  Besides, there are no regulations at all to know what you are injecting, and many times users are not even aware of the steroids they are taking.  Furthermore, many underground labs contain underdosed or 'bunk' products because of both incompetence, and fraudulent intentions.  Thus, the buyer is essentially taking a chance when using them.

Who uses anabolic steroids
It is important to understand that most of the demand for anabolic steroids does not come from cheating pro athletes or teenagers, like you hear in the media.  The users are mostly 'the white collar guys' who go to the gym and want to be stronger, feel and look younger, and become more muscular than they could be without using additional hormones.  Due to the ease of access to anabolic steroids via the internet, the affordability because of an improving economy, and bad quality underground labs undercutting pharma grade prices, they are as easy to acquire as ever.