It is said that Peyton Manning was born to be an NFL Quarterback, as his father played in the NFL, and his younger brother would join him in the NFL too.  Interestingly, his ability to diagnose a defense within seconds, and change the offense play to take advantage of what the defense is giving him on each play, is a major key to his success.  In fact, very few QB's are trusted to do such a thing, and even fewer have the football smarts to do this either.

All in all, Peyton is considered to be one of the best Quarterbacks to ever play American football, and will be headed to the hall of fame on the first ballot after he retires.  Interestingly, he currently owns many records, including most passing yards and most touchdowns ever.  What's more, he has been voted to 14 pro bowls, and has gone to the super bowl 4 times in his career.  He will be turning 40 years old in March of 2016. 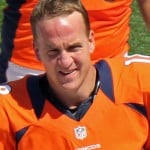 Peyton Manning played at the University of Tennessee, where he broke many records and went 39-6.  As a matter of fact, he was considered the #1 NFL prospect in his junior year, but elected to stay in college until his senior year anyway.

Manning was drafted #1 in the 1998 NFL draft by the Colts, and his only negatives going into the draft were his lack of mobility and arm strength.  However, the very next season the Colts went from 3-13 to 13-3, with a potent offense.  From there on, the Colts offense would have success just about every year, but they would be plagued with a poor defense.  As a result, every time they made it into the playoffs, they would lose.  It was this time, when Manning built a reputation of being incapable of winning big games, as he could not win a playoff game.

However, in 2002 the Colts hired the defensive guru Tony Dungy, whose job was to fix their horrible defense.  It did not take long for Tony to accomplish his coaching task, and on the next season Manning would finally get his first and 2nd playoff win, falling just one game short of the super bowl.  After repeated playoff disappointments, the Colts finally managed to make it to the super bowl in 2006, and they won it against the Bears.  They came back in 2009, before losing this time to the Saints.
After joining the Broncos, Manning has made it to 2 more super bowls.  Therefore, over the course of his career, Peyton has been voted MVP 5 times, and has 14 pro bowl selections.

In spite of playing such a physical sport, Manning has managed to stay healthy most of his career, but there have been two times he has had injuries that cost him considerable playing time.  The first one was major, and it would hinder not only his entire 2011 season, but it cost him his job as well.  Before the 2011 season started, Manning had undergone a series of neck surgeries, including a level one cervical fusion procedure.  This caused him to miss the entire 2011 season, which led to the Colts having the worst record that year, and having the 1st pick of the draft.  They used the pick to draft QB Andrew Luck, and groomed him to be their new franchise QB.

This meant Manning would be released, free to go anywhere he wanted, and he then signed with the Denver Broncos.  The very next season of 2012, he shocked everyone and had a monster season, throwing for 4700 yards and 37 TD's, and he won NFL comeback player of the year.  Amazingly, the next season he had an even better year throwing for 5500 yards, and 55 TD's shattering records.  This was incredible, especially considering the fact that he had major neck surgery just 2 seasons before.
Unfortunately, Manning would struggle with more injuries in 2015.  In fact, by week 10 he played so bad that he was benched, and it was revealed he had plantar fasciitis.  After resting for several weeks, Peyton came back on week 17 to lead the Broncos to an ugly win, and they won their division.  In the playoffs he did not play well either, but the Broncos managed to win because of their strong defense, and made it to the super bowl anyway.

On December 27, 2015, Al Jazeera America released a report that several athletes had received drugs from a pharmacist named Charles Sly.  In that list, Peyton Manning was said to have had 'off label human growth hormone' shipped to his wife during 2011.  As mentioned above, these events took place when Manning was dealing with his neck injury.  What's more, Sly told another athlete that he had sent Ashley Manning (wife) HGH and other 'drugs' during this time, but Peyton Manning has denied the report.

While there is no proof that Peyton Manning used steroids, his HGH use is very suspicious.  Like all NFL players, he was likely using both steroids and HGH, after all he's in a sport of giants.  Can't blame him for trying to level the field in my view.  Since there is no definite steroid cycle for him, we'll attempt to recreate our own version of what a Peyton Manning cycle would look like.

Whey would he use these drugs?
HGH – this was likely used for injury recovery and nothing more.  It's a simple way to recover from injuries without the headache.
Winstrol and anavar – these 2 short acting oral steroids were likely used offseason to help him build up and recover after training.  Likely no injectables were used due to long detection times.

Want to read about Peyton Manning on our forums? check out these threads:

*DISCLAIMER: The cycle/statements above is our opinion on what Peyton Manning could have used, this is for information and entertainment purposes only.  There is no proof Peyton Manning used steroids or HGH.  All information expressed is per 1st amendment rights, this article is in compliance with all legal articles of free speech and is not a claim to any facts – only opinions.

Tags: did Peyton Manning use steroids and hgh?

Written by
Steve Smi
Steve Smi (Also known as Steve Smith), has over 12 years of experience in the bodybuilding and fitness industry. He's the co-Host of the popular Evolutionary Radio Podcast - over 500,000 listens! He has been a personal trainer and writer for the last 10 years with over 1000 articles written. He's been a moderator on forums for over 10 years. Steve holds the following certifications and records: NASM Personal Trainer NASM Fitness Nutrition Specialist Florida Local Powerlifting champion Top writer for 2019 Fitness rated
Have something to contribute?
LEAVE A COMMENT