Irene Limika, retired athlete from Kenya, has called on the government of Kenya to tackle the menace of doping. Limika made these comments after Olympic Marathon champion Jemima Sumgong failed drugs test. 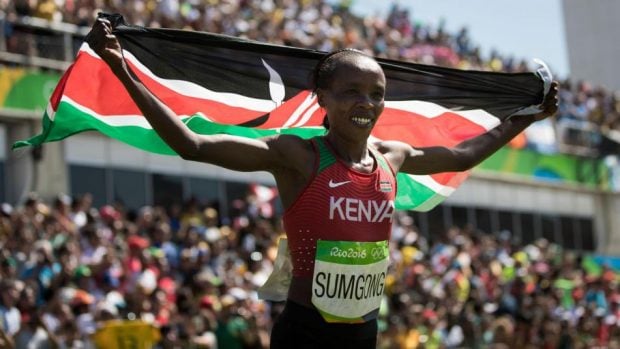 Speaking at the launch of the second edition of the Marsabit Lake-Turkana Half Marathon, Limika remarked there were no cases of doping during her days. The retired athlete said she would like to see the country go back to the good old days. The former athlete said doping has become a global issue and she urges the Kenyan government to put structures to fight it so that we bring back our glory where we were before.

The 38-years-old, who has competed in both track and road races, asked stakeholders to elect Paul Tergat at the May 5 National Olympic Committee of Kenya elections. Limika called on the new leaders to fight doping and ensure it is eradicated completely. Limika also commented that she is happy to be part of Marsabit Half Marathon and added we have talents all over our country especially in the northern part of Kenya like Marsabit. Limika said the government should put camps to enable these athletes train for them to achieve their dreams of becoming world champions and bring medals to our country.

An investigation by German television channel ARD and Britain’s Sunday Times newspaper last year alleged that doping is rife and widespread at the elite training centre in Iten. More than 40 Kenyan track-and-field athletes failed doping tests between 2011 and 2016. The country recently put 109 elite athletes under the watch of a team of selected doctors in a bid to stop doping. Athletics Kenya chief Jackson Tuwei remarked it would be mandatory for elite athletes to go through the newly formed Kenyan Doctors Network if they want to participate in international competitions. The move was initiated in a bid to get Kenya off the IAAF watchlist. Tuwei also said we cannot continue to be doubted by the world as a top athletics federation and country.

In the recent past, the Kenya Anti Doping Agency (ADAK) has stepped up its campaign to educate athletes on the need to win clean. It launched a campaign targeted at reaching over half a million sportsmen to fight the use of banned substances. The Anti-Doping Agency of Kenya also remarked it will be working closely with the media to reach out to sportsmen and women in their mission to sensitize them on doping and its effects.

ADAK Chief Executive Officer Jasper Kiplimo Rugut said we want our athletes and sportsmen to win clean. Rugut also said these road shows are meant to create awareness and educate our athletes and even non athletes on the dangers of doping. The ADAK Chief Executive also remarked we will engage sportsmen, brand ambassadors, government, federations, media and sports lovers in this mission until we ensure that our motto of Stay Clean, Win right is achieved.

Last year, Kenya was last year declared in breach of anti-doping rules and athletes of the country underwent special testing for Rio 2016. Kenya was about to face a possible expulsion from the Rio Olympics after being deemed “non-compliant” by the World Anti-Doping Agency, but was reinstated before the Games.