Heart - Enlarged heart twice as big as it should be. There was some plaque, but nothing abnormal.

Kidney/liver - Both were discolored and his liver was double the normal size. Years of drug abuse both recreational, Rx drugs, and oral steroids would cause this.

Rich Piana recently had his autopsy released. In this article, we will try and figure out what happened to him so we can learn from this tragedy, and prevent this from happening to us or a loved one. 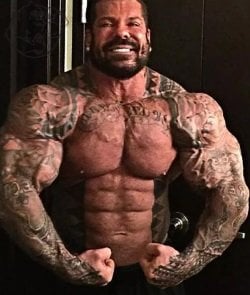 If you do not know who Rich Piana is I encourage you to read our prior articles on him including the article breaking the news of his death here: https://www.evolutionary.org/rich-piana-death/

Piana was a larger than life figure in the fitness industry, having a huge fan base on social media and an even bigger presence in the bodybuilding community, even though he was no longer even actively competing. If you visited any supplement expo's, Piana's booth would always be the one where people stood in line to get a picture with him, or just to see him up close.

When it was reported he was in the hospital in a coma people did the not believe it, and when it was confirmed everyone thought he would be posting videos from his bed laughing about it then a few days later back in the gym like nothing happened. He built a superhero image via brilliant marketing, but in the end, he was still just a human being. We discussed this superhero image and reality with another fitness celebrity Marc Lobliner on a recent podcast which you can listen to here > https://www.evolutionary.org/evolutionary-radio-episode-135/

Speculation on his death

When his death was rumored on the internet at first nobody believed it, but his girlfriend was the one who confirmed it to be true. The community still did not want to believe it, and many thought it was a hoax and he would be posting up a video saying it wasn't true.

There was speculation by those close to him that he had a drug issue, an enlarged heart, as well as steroid abuse rampant in his past 25 years of his life. He had talked about these issues on some of his videos and seemed to want to cut back on everything in his last year, even suggesting he would lose mass to become healthier. 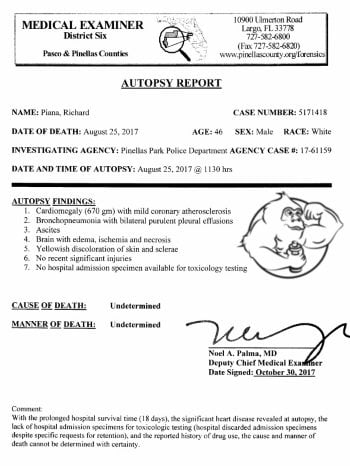 Rich Piana - Cause of Death - Undetermined

Piana had spent his life in California but recently was living in FL, near Tampa, where his warehouse was located for his 5% nutrition super supplement company. It was in Clearwater, FL (a beachside city west of Tampa) where he collapsed while getting a haircut from his girlfriend and banged his head. The district 6 medical examiners office which handles Pinellas and Pasco counties in Florida put out their autopsy results:

The autopsy showed significant heart disease and an enlarged heart and liver (twice the size for an average adult male). It did not conclusively show the reason for death or manner of death, which may be blamed on the fact that the hospital did not save his blood samples after he was admitted.

1. Edema and swelling of the brain - likely caused by his fall and hitting his head rendering him braindead.

2. Heart - Enlarged heart twice as big as it should be. There was some plaque, but nothing abnormal.

3. Lungs - He had fluid in his lungs, which could be from the heart failure.

4. Kidney/liver - Both were discolored and his liver was double the normal size. Years of drug abuse both recreational, Rx drugs, and oral steroids would cause this. Kidney's being discolored are typical of weight trainers because they are frequently breaking down muscle.

Rich Piana's blood work would have picked up on all this stuff, with multiple red flags, so it is evident he just didn't care or didn't believe he would be another statistic. Perhaps he wanted to change but bigorexia, which is the insecurity of wanting to be massive, got the better of him.

Recreational drug use could have sped up the process, but he was headed for disaster one way or another.

The heart seems to be the key here. The heart-stopping would stop oxygen from going to the brain which would cause him to collapse. Had he not hit his head, he may have been okay after going to the hospital, but it would still be a disaster waiting to happen with such a strained heart. Likely, he would have continued having these types of episodes; in fact, it was confirmed he had a similar incident a few months prior while overseas.

I implore everybody to do blood work at least 3X per year and check your lipid health. Poor cholesterol levels and high blood pressure are red flags that your heart is not healthy. Do not take this lightly and don't push it off like Piana did and figure you will fix it one day. I'm sure Rich was under so much peer pressure that he made a business decision to not do anything about it.

Being too big as Rich Piana is bad. Whether it is muscle mass or fat mass, size like this is NOT healthy. Unfortunately, many Americans have heart problems, so this is nothing new, and it is becoming all too common for people to have heart stroke or heart attacks in their 30's and 40's.

You need to eat and drink healthily, exercise daily, and avoid abusing drugs of all kinds - yes even steroids!

Join the Evolutionary.org forums and have your say on Rich Piana's Death!