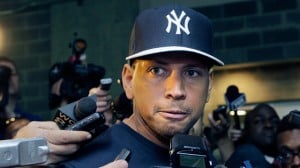 It is widely believed that Rodriguez privately told advisers that he was ready to cut a deal with Major League Baseball officials and quit the game. One source close to the case said Alex Rodriguez had been talking about retirement because of injuries given his prior involvement with doping, he knew he would be a target for additional testing and there was no way he could use and play again. But, the last chance for a dignified exit for A-Rod ended when he turned to former drug mole and ex-convict Desiree Perez, a Manhattan nightclub manager with a lengthy criminal record and close links to hip-hop mogul Jay Z.

Perez is a major behind-the-scenes influence though she is not an employee, officer or agent of Jay Z’s new agency, Roc Nation Sports. Perez has a long and wild history as a DEA cooperating witness and then a fugitive besides being a convicted felon. According to federal court transcripts obtained by a leading newspaper, Perez wore wires to meet with major cocaine traffickers.

Rodriguez describes Perez only as a “long-time friend” though it is rumored that it was Perez who was behind much of the failed legal and PR strategy of Rodriguez last summer. The third baseman, who has no official ties to Roc Nation Sports, said he made his own decisions with his legal team over the last year, and he had accepted his penalties and is trying to serve his penalty. Perez called for blood last summer, fueled by animus toward MLB and distrust of the Yankees, urged Alex Rodriguez to fight Major League Baseball on Biogenesis even though the investigators of the league had flipped Anthony Bosch, the anti-aging clinic’s proprietor.

A-Rod decided to bet his future on the advice of Desiree Perez, a woman who can described as a woman with a dubious past and zero experience with arbitration, collective bargaining, or the drug policy of baseball. Court records reveal that Perez was part of a massive cocaine distribution case in 1994 and she became a key government cooperator by going into cover to help the Drug Enforcement Administration build successful cases against major traffickers in Puerto Rico and Colombia. Her cooperation won her supervised release but she went on the lam and thereafter served nine months in prison.

It is believed that Perez made a demand that Rodriguez fight and accused him of letting MLB and the Yankees drive him from the game at a time when Rodriguez was fighting it hard to protect his massive contract amid allegations of performance-enhancing drug use. Rodriguez then claimed that the Yankees and MLB were conspiring to push him out of baseball and remarked that people are finding creative ways to cancel his contract. However, Commissioner Bud Selig hit Rodriguez with a 211-game ban.