The International Olympic Committee has stripped Russia of their women's 4 x 400m relay silver medal from the London 2012 Olympics. 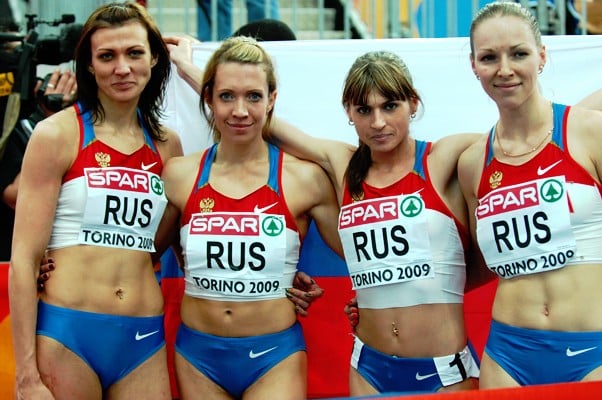 The IOC made this announcement after Antonina Krivoshapka tested positive for drugs in the re-testing of her sample. Krivoshapka tested positive for the anabolic steroid Turinabol (Dehydrochloromethyltestosterone) and her relay teammates will also be stripped of their medals. The IOC also disqualified Krivoshapka from her sixth-place finish in the individual 400 in London. The athlete now faces a ban by the world governing body of athletics, which could threaten her relay gold and individual bronze from the 2013 world championships in Moscow.

The Russian sprinter, who specializes in the 400 meters, won the 400 m gold medal at the 2009 European Indoor Championships. She also won a gold medal in the 4 x 400 meters relay, together with teammates Natalya Antyukh, Darya Safonova, and Yelena Voynova at the same championships.

Krivoshapka became the 17th London medalist caught in an IOC program of re-analyzing samples using a newer test that can trace use of anabolic steroids going back weeks instead of days. The Russian athlete had won an array of medals at worlds, European outdoor and European indoor championships.

The United States won the relay with Jamaica third and Ukraine fourth. The Russian 4x400m team – which included Krivoshapka, Yulia Gushchina, Tatyana Firova and Natalya Antyukh – had finished ahead of Jamaica.

The 4x400m relay men's team of Russia that won bronze in Beijing was similarly stripped of its medal because of doping.

The International Olympic Committee is currently re-testing hundreds of samples from the London and Beijing Olympics to detect any cheats using newer anti-doping methods and techniques.

It was also announced by the IOC that Vera Ganeeva of Russia, who competed in the women’s discus throw event in which she ranked 23rd, has been disqualified from the 2012 Olympic Games London after the re-analysis of her samples resulted in a positive test for Turinabol.

Russia has the most cases per nation with more than 100 athletes have so far tested positive in these re-tests.

In a statement, the IOC remarked the protection of clean athletes and the fight against doping are top priorities for the International Olympic Committee (IOC), as outlined in Olympic Agenda 2020, the IOC’s strategic roadmap for the future of the Olympic Movement. The statement further reads that the IOC to provide a level-playing field for all clean athletes at the Olympic Games Rio 2016 put special measures in place, including targeted pre-tests and the reanalysis of stored samples from the Olympic Games Beijing 2008 and London 2012, following an intelligence-gathering process that started in August 2015.

The IOC statement also reads that the additional analyses on samples collected during the Olympic Games Beijing 2008 and London 2012 were performed with improved analytical methods, in order to possibly detect prohibited substances that could not be identified by the analysis performed at the time of these editions of the Olympic Games. The International Olympic Committee has asked the International Association of Athletics Federations (IAAF) to modify the London 2012 results accordingly and also to consider any further action within its own competence.