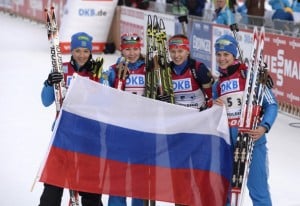 Russian biathletes Ekaterina Iourieva and Irina Starykh are likely to face extended suspensions after samples that showed atypical results in previous seasons were reanalyzed by the International Biathlon Union (IBU).

The biathletes were suspended earlier in 2014 after they tested positive for banned substance Erythropoietin (EPO) before the Winter Olympics in Sochi.

Irina Starykh was removed from Russia's Olympic biathlon team for Sochi 2014 after confirmation of her positive drugs test. The 26-year-old admitted to her involvement and vowed to leave the team despite protesting her innocence. Starykh remarked she had received a notification from the IBU in which it was stated that one of her tests gave a positive result. She added this news was a major unexpected event for her and everyone should believe her when she says that respectfully regrets that this story is linked with her name. Starykh was replaced in the Olympic team by reserve athlete Galina Nechkasova.

Former world champion Ekaterina Iourieva received a doping ban of eight years after her second positive drugs test. She has already been suspended for two years for using erythropoietin (EPO) in 2009 and announced her retirement after her second positive test. The 30-year-old Ekaterina won gold, silver, and a bronze medal at the 2008 World Championships in Östersund.

Biathlon has been struck with many doping cases in the recent past. German biathlete Evi Sachenbacher-Stehle received a ban of two years that was later reduced to just six months after she filed an appeal to the Court of Arbitration for Sport (CAS) against the decision of the International Biathlon Union's (IBU) Anti-Doping Panel.

Sachenbacher-Stehle tested positive for banned stimulant Methylhexanamine at Sochi 2014. The Panel attended a hearing at the CAS headquarters in Lausanne on Wednesday (November 12) and was composed of Professor Luigi Fumagalli from Italy, Jeffrey Benz from the United States, and Patrick Lafranchi from Switzerland. It was found by the CAS Panel that the adverse analytical finding was caused because of contamination and that the degree of fault by the athlete was minimal. The CAS statement reads the Panel in view of the fact that Sachenbacher-Stehle's suspension has now concluded has issued its decision and will provide the full arbitral award, containing the grounds for its decision at a later date.

The German biathlete won cross-country skiing gold medals at Salt Lake City 2002 and Vancouver 2010 before she shifted her focus on the biathlon in recent years. Sachenbacher-Stehle blamed contaminated food supplements for the result.

The International Biathlon Union (IBU) was also hit by a scandal when doping infringements by Vice-President Gottlieb Taschler surfaced. The 53-year-old former biathlete decided to temporarily step down from the IBU and claimed shock at the media reports regarding the incident that according to him were simply not true. Taschler was accused of arranging a meeting between disgraced doctor Michele Ferrari and his son Daniel, a member of the Italian biathlon team, in order to acquire performance enhancing drugs and specifically to obtain the banned blood-booster erythropoietin (EPO).