United States long jumper Marquise Goodwin has accepted a ban of one year from the United States Anti-Doping Agency but is free to play for the San Francisco 49ers in the NFL this season. 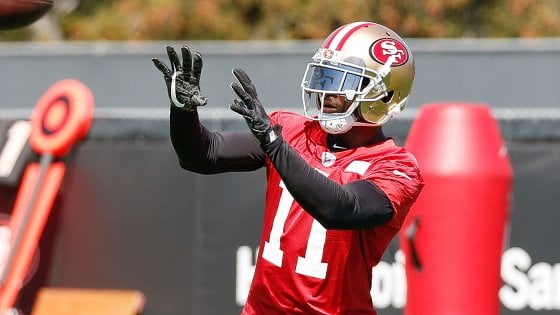 The 26-year-old former Olympian remarked he quit athletics "more than a year ago" to focus on American football and he therefore stopped providing whereabouts details to USADA for testing. However, a USADA spokesperson said Goodwin submitted his whereabouts for the first quarter of 2017. The United States Anti-Doping Agency then tried to test him on January 17 that resulted in a missed test that was his second whereabouts failure while the body conducted an out of competition test on Goodwin in his capacity as a track and field athlete on May 12. The first whereabouts failure of Goodwin occurred when he failed to submit his fourth quarter 2016 filings by the deadline. The third failure occurred when he did not provide his second quarter 2017 filings in time.

Athletes must specify under the whereabouts system where they will be for one hour a day, seven days a week, for three months in advance, as well as where they will be training each day. A filing failure or missed test constitutes a whereabouts failure and any combination of three breaches in a 12-month period is considered an anti-doping violation.

Goodwin, who finished 10th in the long jump at London 2012 and has played in the NFL as a wide receiver since 2013, received a one-year ban from 1 April 2017, the date of his third whereabouts failure.

In a statement, the United States long jumper said he discontinued all practices associated with competing in track and field, including submitting his whereabouts information. Goodwin said it appears to him that his name was inadvertently included in their 2017 testing pool as he did not informed USADA of his plans.

In reply, USADA said Goodwin, who missed out on selection for Rio 2016 at US trials in July last year, had still not informed them in writing as required that he would like to retire from athletics, despite "multiple opportunities over months" to do so. A spokesman for the United States Anti-Doping Agency said Marquise Goodwin sometimes filed his whereabouts, he was tested and he never informed us despite being told in writing and through online education that he needed to inform us that he wished to retire or otherwise not participate in the sport. The spokesperson added we always ensure athletes are aware that we are the organization conducting the tests and added we are not involved with the NFL drug testing program. The USADA spokesperson added Goodwin had multiple opportunities over months to do this and was well educated on these procedures but he chose not to do either, and as a result was not able to be tested.

The NFL is not a signatory of USADA or the World Anti-Doping Code and has its own performance-enhancing substances policy. Therefore, Goodwin will not be subject to a ban under NFL rules. In a statement, the 49ers said Marquise informed the organization some time ago that he has no intentions of competing in track and field and has been entirely focused on his football career for more than a year.