South African 110m hurdles champion Tiaan Smit will be possibly stripped of his national title after he was banned for a period of four years for doping. 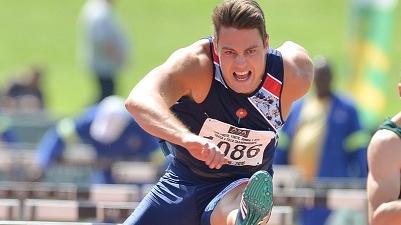 The A-sample of Smit taken after he upset Rio Olympian Antonio Alkana at the South African Senior Championships in Potchefstroom in April returned an adverse analytical finding. The athlete waived his right to have his B-sample analyzed and was provisionally suspended from competing from May 25. During the hearing, Smit admitted to making use of Clenbuterol to shed 2 to 3kg. In its ruling, the disciplinary panel said the athlete admitted it was very negligent of him not to ask his doctor or coach, or to do some research on products. The panel added Smit stopped using the substance as the side effects got the better of him.

The tribunal's judgment read Tiaan Smit is an experienced athlete and the fact that he did not make a substantial effort to find out what he was using, taking into account all the resources at his disposal, is in itself a big departure from the expected standard of behavior of such an athlete. It was also added that an athlete of this profile who competes at a national level, who is aware of anti-doping rules, who was tested twice before but yet did not take any measures to ensure what he was about to use is not on the banned list.

Smit said he had competed in two other events while on the anabolic agent but added it did not make any difference on the times he was running. However, the data website of Tilastopaja athletics lists his six fastest career times as being posted between March 11 and April 22 this year.

Smit had added he stopped making the use of Clenbuterol about 10 days ahead of the national championships because of severe side effects such as sleeplessness‚ shaking‚ irritability, and sweating. The hurdles champion said he did not declare Clenbuterol on the anti-doping form at the competition because it had asked only what he had used in the last seven days. The SA athlete said he was on anti-depressant medication to help with the trauma he is presently experiencing of being tested positive and not being able to compete anymore.

The hearing report‚ as signed off by panel chairman Marius Hurter‚ said Smit had a professional coach in Hennie Kriel as well as a personal doctor but he did not consult any of these two persons close to him as to what he should or can use that is legal to help him lose more weight. Hurter said the athlete instead asked his friend the javelin thrower for some advice. The ban on Smit is backdated to May 25 when he was initially suspended after he was been informed of the adverse finding.