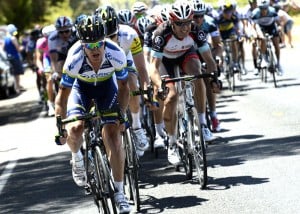 O'Grady, who rode as a professional between 1995 and 2013, differentiated himself from drug cheaters Lance Armstrong and Tyler Hamilton in an interview in Melbourne. O'Grady said Armstrong and Hamilton doped a lot more sophisticated, they had a medical team behind them and added that they were doing it almost using it like a game, beating the system. He described his use of EPO as something he did alone when the governing body [the UCI] wasn't hard enough and added that he had learnt about it by opening his ears during races.

The retired cyclist said he was ready to participate in an independent reform commission process being funded by the Union Cycliste Internationale (UCI) but added that cycling was an ''easy target'' and is paying the heaviest price for a problem he says is much more widespread.

O'Grady added it is a good idea by the UCI to establish the commission that would be offering a chance to past dopers to turn themselves in through an ordered process. He however remarked people should stop crucifying past dopers if they are going to come up and confess else they are just not going to come forward. The retired Australian cyclist added that a lot of sports back in the '90s had probably massive doping issues and cycling has been a bit of an easy target, because we have had some major crises, which is all fair enough. O'Grady also said but he thinks we have to move on, otherwise it's just never going to stop and there's also been a lot of doping stories in athletics, in football codes and everything else, pretty much every other sport in the world.

When asked if he would have come clean had it not been for the French investigation findings, O'Grady said he wouldn't have said so at that time. He however said he doesn't think he would have gone through his whole life without it coming out and added he had been holding onto that - the guilt - for many years and it's probably the reason he raced for so long that one can ride the Tour [de France] 16 times without it.

For the 2014 season, Stuart O’Grady has re-signed with ORICA-GreenEDGE and remarked that cycling has been his life in the last 20 odd years. He added it will be nice to wake up and think about something other than training and suffering and pain and he is looking forward to spending more time with his family and not having to be so selfish on a personal level. O’Grady added he had not done that for a long time and we have time to find a role for himself after retirement. He also remarked once he hangs it up, it will hung up very high and very well and there will be no comeback.