Recently, when I was at the gym with my girlfriend, she pointed out a guy who had huge and deformed arms, and she told me "he must be using steroids." I told her he probably was, but his enormous looking arms weren't the product of steroid use, but more likely he was using Synthol. So she asked me: "What is Synthol? Have you used it?" My answer was that it is an oil that is injected directly into the muscle to give it the appearance of being big. In this article, I will explain what exactly synthol is, and the dangers of using this legal substance.

Fig 1. Synthol Bottle (different bottles are on the market)

Exactly what is Synthol?

As mentioned above, synthol is NOT a steroid at all. When you use steroids, they will improve your recovery from workouts and will increase protein synthesis to help build muscle easier. In addition, steroids will even shuttle in nutrients and blood into the muscle to promote growth, which enhances strength. Steroids are injected intramuscularly and work their magic depending on the ester attached to them, but generally, it will take a few weeks to see results.

Synthol, on the other hand, does not aid in strength at all. In fact, 85% of synthol consists of site enhancement oil, with the remaining 15% of it being lidocaine and alcohol. What's more, unlike steroids, with synthol you see results immediately; however, you must inject it into each particular muscle that you want to see results with.

Synthol is relatively easy to purchase online - you can go on eBay and buy this stuff if you wanted to. Interestingly, synthol has gained a lot of popularity in Latin American countries due to social media of certain celebrities that have used it. For instance, one of the guys credited with the interest in synthol is Arlindo de Souza, who boasts the largest biceps in Brazil at about 30 inches! He is well known as a freak show at home and has admitted that he is no stronger with 30-inch biceps than he was before injecting it. 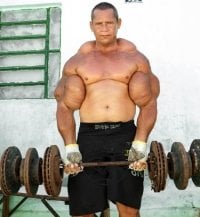 Perhaps it is an insecurity that leads people to inject synthol, or maybe it is the frustration and impatience of many guys who lift weights and do not get any results. An example of this is Moustafa Ismail, who is originally from Egypt, but now lives in the USA. He has a website and boasts that he has the Guinness World Record (set while 25 years old) of having the largest biceps in the world at a whopping 31 inches, which is bigger than some men's waist! However, skeptics have attacked him and said he should not be recognized due to his very liberal synthol and steroid use, and some say that he actually used implants. Meanwhile, Moustafa defends himself by claiming that he eats 7 pounds of protein a day, along with 9 lbs of carbs, and 3 gallons of water. In addition to that, according to his claims, Moustafa has been working out since he was 12 years old. Furthermore, he also claims to workout twice a day for a minimum of 3 hours. 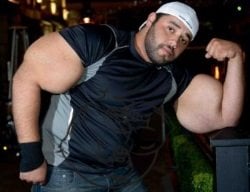 There are regrets from even some very young users. For instance, the Brazillian Romario Dos Santos Alves is a very popular synthol user who boasts 25-inch arms because he wanted to model himself after the Incredible Hulk. Unfortunately, after getting the idea of using synthol from his role models at the local gym, he started abusing it.

As a result, doctors have told him that his muscles have 'turned into rock' and that they might have to amputate his arms. In addition to that, in an interview with the Daily Mail, he said children call him a monster, and that he even tried to kill himself. You can read the entire article here. 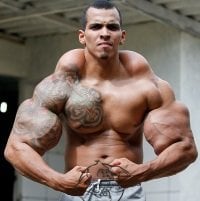 Sadly, the problem with synthol is that it is hard to use this substance just once, and after you start using it you will be hooked. Indeed, synthol use is very tempting - would you rather work out for years to grow your arms' inches, or simply inject oil? Hence, the emotional addiction is a genuine danger of synthol.

Some bodybuilders flat out deny their use of synthol. For example, Gregg Valentino is extremely adamant that he has never used synthol. Instead, Valentino says that he injects Testosterone Propionate and Equipoise directly into his bicep, which caused a fascia stretch. However, this theory has come under fire because experts say that site injecting steroids will only cause growth from scar tissue formation, which is temporary. Obviously, it is hard to know for sure if Valentino is telling the truth, but he seems to embrace the drama and has put up numerous videos blasting his critics, including this funny one: 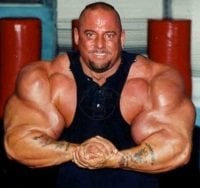 The most common risk associated with synthol use are direct site infections, which can build up a pus-like substance that needs to be drained by a professional, and will require a round of antibiotics.

Scarring is another major problem, as it will reduce blood supply to the muscle, and can potentially cause eventual amputations of the limbs. (this is uncommon) Moreover, fatal occurrences of synthol use have been recorded due to staph infections, which can quickly spread throughout the body.

Oh yeah and let's not forget the other risks:

It is quite easy to go online and find stories about problems caused by synthol use.

And here is a case study on a bodybuilder who suffered from muscle fibrosis as a consequence of synthol use https://www.ncbi.nlm.nih.gov/pmc/articles/PMC3459719/ The conclusion was the following:

"Synthol injections that are used for the short-term enhancement of muscle appearance by bodybuilders bear the danger of long-term painful muscle fibrosis and disfigurement."

Bostin Loyd, who has appeared on several evolutionary.org podcasts, has a story on synthol of his own. He suffered major problems in his arms and wasn't shy about posting about it on facebook: 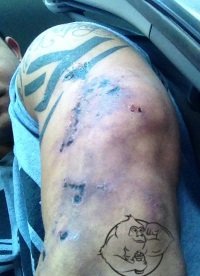 My opinion and observations

This is purely my view of sythol and doesn't represent anyone else. My take is this, if you show women a photo of a bodybuilder with 30-inch synthol biceps, she will not find it attractive. Just try it yourself, and I will send you a dollar for every woman who says she finds that sexy, and for everyone that finds it grotesque, you will send me a dollar. I would be a millionaire very soon.

However, even taking women's opinion away, and looking at it from a purely proportional and aesthetic standpoint, synthol makes you look silly. The muscles will have a soft and spongey look resembling inflated balloons. Besides, those who understand synthol, know that the muscles filled with synthol in no way translate to strength.

Bottom line: a synthol injected muscle isn't real muscle, and it doesn't make you stronger. It is just a way of lying to yourself about how big your muscles really are, and to cover your over-inflated ego. Therefore, it is my view that synthol should be considered unnecessary for a bodybuilder, and the only thing dumber than synthol are muscle implants, which ironically are even safer for one's health.

Editors note: While Steve makes a great point, we want to point out that there are uses for synthol in our industry. It's up to the individual to decide what they want to use and how they want to use it. We are here to give you opinions and facts, mixed, but, in the end, the decision is yours.

Want to voice your opinion on synthol? Click the below forum threads to discuss synthol on our forums...