Astana rider Ilya Davidenok has failed a doping test for anabolic steroids at the junior Tour de France in August. This is the third suspension for Team Astana after Maxim and Valentin Iglinskiy tested positive for EPO earlier this year. 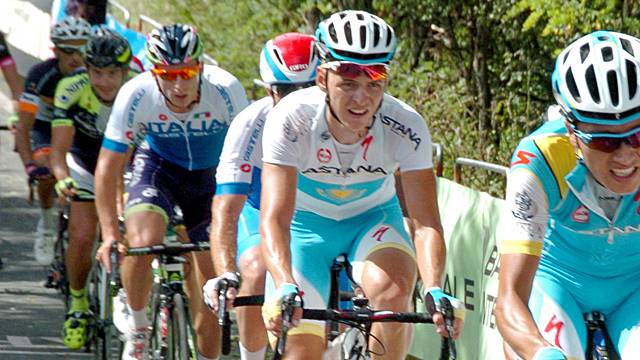 Davidenok has been a stagiaire (trainee) with the full squad of Team Astana since August 1 after spending the past two years with Astana’s development team. His sample returned an ‘adverse analytical finding’ for anabolic androgenic steroids in a sample collected at the Tour de l’Avenir on August 28. The cyclist is the road race champion of Kazakhstanand finished eighth in the Under-23 race at last month’s world road race championships. Ilya Davidenok is yet to indicate whether he will be requesting analysis of his B sample. He has been provisionally suspended in the meantime.

The UCI remarked last week that Team Astana could have "conditions attached to their license".  With the third positive this year, Team Astana will have its WorldTour elite status reviewed. The professional road bicycle racing team sponsored by the Samruk-Kazyna recently self-suspended itself after Iglinskiy brothers failed drug tests.

In a statement, the Union Cycliste Internationale (UCI) remarked it will ask the License Commission to undertake a full review of the management and anti-doping policies of the Astana Pro Team. The statement reads this follows the serious concerns raised by the fact that two Astana riders, Maxim and Valentin Iglinskiy recently tested positive for EPO and the notification this week that llya Davidenok has returned an Adverse Analytical Finding for anabolic androgenic steroids in a sample collected at the Tour de l’Avenir on 28th August 2014. It was further added that IIya Davidenok has ridden from 1st January 2012 to date for Continental Team Astana and since 1st August 2014 has also been a stagiaire with Astana Pro Team.

The UCI statement said the rider has the right to request analysis of the B sample and in accordance with UCI Anti-doping Rules has been provisionally suspended until the adjudication of the matter and added that at this stage of the procedure, the UCI will not comment any further on this individual case. The statement also reads the License Commission is the competent body for issuing, reviewing, withdrawing and attaching conditions to UCI WorldTour licenses and ensuring that license-holders continuously comply with the terms of the license. The UCI press statement said it is expected that the team will appear before the License Commission as per the UCI regulations within the next month for an assessment of the team’s level of compliance with the ethical criteria so that the appropriate measures can be then taken. The UCI statement also disclosed that it will be for the License Commission to determine whether, and to what extent, the team and/or its management is responsible for recent events and the UCI will not comment further at this stage.

Astana team manager Alexander Vinokourov said the threat that Astana will be left without a WorldTour license, it is always there.