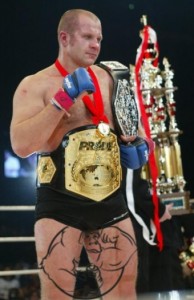 Fedor Emelianenko is a mixed martial arts legend, considered by many the greatest fighter in the history of the sport. Hailing from Russia, “The Last Emperor” began his martial arts training in the disciplines of Combat Sambo and Judo, and was among the world’s greatest Sambo practitioners both before and after his highly successful entrance into mixed martial arts.

Fedor in his prime was unbeatable and he knew how to finish fights even if it looked like he was in trouble in the fight somehow he would finish on top with an excellently executed submission or knockout. He beat the best Heavyweights in the world at the time and did so convincingly. He only had 3 losses at the end of his career. He was untouchable in his prime! 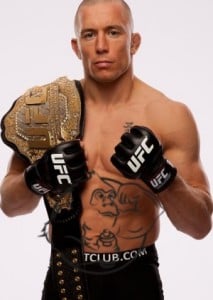 Georges St. Pierre is the current Welterweight Champion of the UFC. He hails from Montreal, Canada. GSP as most know him has one of the most well rounded games in the UFC. He is incredibly intelligent in the cage and fights to his strengths very well. He is an incredible wrestler and has it has been mentioned before that he is good enough to wrestle for the Canadian Olympic team. He had no wrestling experience and would be considered an amateur. He is a very gifted athlete who puts a lot of focus on his training. 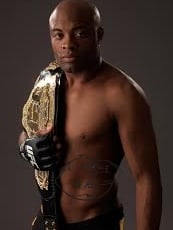 Anderson Silva hails from Curitiba, Brazil and was the former Middleweight Champion of the UFC. The Spider as people refer to him as is an incredible stand up striker with a background in Muay Thai, Taekwondo and Boxing. His style of fighting has been labelled as the most exciting in the world with some mesmerizing knockouts of opponents. His style is hard to read as he almost plays with his opponents before knocking them out. He had the record of the most consecutive wins in the UFC and the most title defenses in the UFC as well before recently falling to Chris Weidman. 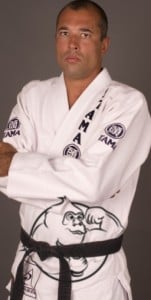 Royce Gracie singlehandedly revolutionized the sport of MMA. Son of a legendary jiujitsu master Helio Gracie. He also paved the way for today's fighter's especially fighters like Anderson Silva who is a Gracie Jiujitsu student. He was so dominant, they had to change the rules and forbade the wearing of gi's and shirts because it was making people submit too often. His only flaw was that he wasn't the best striker but there is no question he is one of if not the best ever in ground fighting. 19 total fights, 14 wins, 2 losses, 3 draws, 2 KO's, 2 by decision, 12 submissions. He was the open weight champion of UFC 1,2 and 4 and would be fighting 3-4 fights in one night. 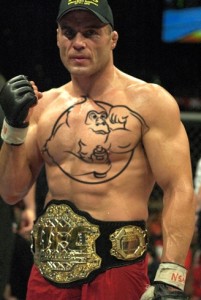 During his tenures in the UFC, Couture became a three-time UFC Heavyweight Champion, two-time UFC Light Heavyweight Champion, an Interim UFC Light Heavyweight Champion, and was the UFC 13 Heavyweight Tournament Winner. Couture is the first of only two fighters to hold two UFC championship titles in two different divisions (along with B.J. Penn). Couture has competed in a record 15 title fights. He holds the most title reigns in the UFC with five. His last fight with Lyoto Machida marked his 24th fight in the UFC, the third largest number of fights in the UFC (Tito Ortiz is first with 27 and Matt Hughes is second with 25). Couture is the fourth member of the UFC Hall of Fame. He is the only person over the age of 40 to have won a UFC championship fight, having done so four times. 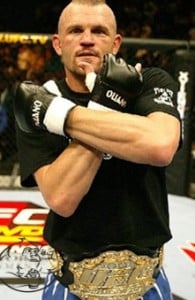 Chuck Liddell is a retired American mixed martial artist and former UFC Light Heavyweight Champion. Liddell has an extensive striking background in Kenpo, Koei-Kan karate and kickboxing, as well as a grappling background in collegiate wrestling and Brazilian Jiu-Jitsu. Liddell finished his career with the second most knockouts in UFC history, behind Anderson Silva. Liddell had 23 fights in the UFC, and along with Randy Couture, is widely credited for bringing mixed martial arts into the mainstream of American sports and entertainment. On July 10, 2009, he was inducted into the UFC Hall of Fame. 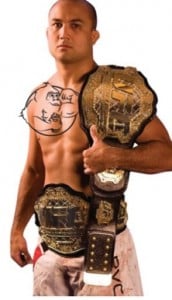 BJ Penn is an American professional mixed martial artist and Brazilian Jiu-Jitsu practitioner. Penn debuted and competed in the UFC, as well as in K-1. Prior to fighting for the UFC, he became the first American Gold medalist of the World Jiu-Jitsu Championship. In mixed martial arts, Penn has competed in the Featherweight, Lightweight, Welterweight, Middleweight and Heavyweight divisions. 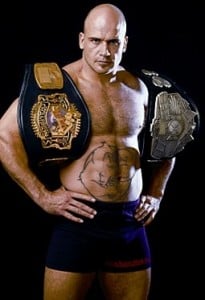 Bas Rutten is a Dutch retired mixed martial artist, Karate and Taekwondo blackbelt, and kickboxer. He was a UFC Heavyweight Champion, a three-time King of Pancrase world champion, and finished his career on a 22 fight unbeaten streak (21 wins, 1 draw). He is currently the star of Punk Payback on Fuel TV and co-host of Inside MMA on AXS.TV.

As a fighter, one of his favorite tactics was the liver shot (both punch and kick), and he popularized its use in MMA. Rutten is known for his charisma and has capitalized on his celebrity since retiring from fighting in 1999. He has worked as a color commentator in several MMA organizations, including Pride, and has appeared in numerous television shows, movies, and video games. He also coaches MMA and has authored several instructional materials. 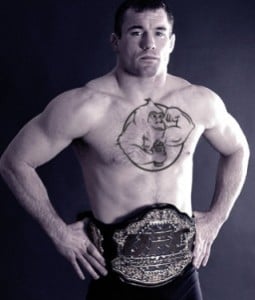 Matt Hughes is an American retired mixed martial artist, NJCAA and UFC Hall of Fame inductee, and former two-time UFC Welterweight Champion. During his tenures in the Ultimate Fighting Championship, Hughes put together two separate six-fight winning streaks, defeated all the available opposition in the welterweight division, defended the belt a then-record seven times (Georges St-Pierre later broke his record), and was currently surpassed by GSP for the record of most wins in the UFC. He remains the first of only two men to ever defeat Georges St-Pierre.

During his reign, Hughes was widely considered the #1 pound-for-pound mixed martial artist in the world. Hughes was also regarded by many analysts and several media outlets as the greatest welterweight fighter of all time until the rise of Georges St.Pierre, as well as one of the greatest pound-for-pound fighters in the sport's history. 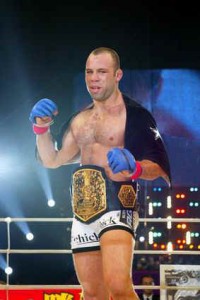 Wanderlei Silva is a Brazilian mixed martial artist, who has competed in Japan's Pride Fighting Championships and the American based Ultimate Fighting Championship (UFC). Silva is known for his aggressive fighting style with the majority of his fights ending in knockout or referee stoppage due to strikes. His style includes engaging opponents with punches and knees from the Muay Thai clinch. Silva is famous for his aggressiveness, but after the fight is over, he is known for showing respect and a sense of sportsmanship. He holds the record for the most wins, knockouts, title defenses, and longest winning streak in PRIDE history. He is the former PRIDE Middleweight Champion, and the 2003 PRIDE Middleweight Grand Prix Tournament Champion.