Trendione, also known as trenavar, is an oral prohormone that differs from the well known injectable steroid trenbolone only by a ketone at the 17th position.  Therefore, it yields active trenbolone in the body, making it an extremely powerful and potent compound.  Since it is so similar in structure to trenbolone, aside from the tren cough (which is usually a result of accidentally injecting tren into a vein), the user should get very similar results as using injectable trenbolone. 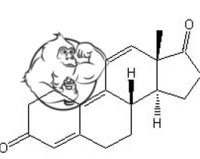 Trendione was released in 2011 by PHF/IBE as a true prohormone to trenbolone.  It quickly became popular as one of the most powerful prohormones available, and was sold all over the internet until the recent prohormone ban.  Consequently, today it is found only on the veterinary and black market because it's illegal and scheduled III as steroids.

The injectable trenbolone is known as a powerful injectable steroid.  On paper, it is 5 times more androgenic and anabolic than testosterone.  Trendione is also very powerful and will bring on very fast strength and size increases, possible fat loss, and greater vascularity.  Unlike other copycat prohormones that attempt to mimic trenbolone, trendione actually does convert to trenbolone in the body.

As you can imagine, the side effects are extremely brutal with this compound.  There are several reasons for this.

Users claim rapid increases in their muscle mass and strength across the board, with gains starting to happen within 7-10 days after the first dose.  After 4-6 weeks, most users who do strength training will say they are very close to, or exceed, their personal records on their lifts.  Moreover, they also report muscles being tighter, massive pumps during their training, and more vascularity.

Regarding the endurance aspect of training, trendione is a poor choice, as it will cripple your endurance goals.

Dosage and how to stack

Initially, trendione should be dosed at 50-70 milligrams (mg) per day split dose when ran alone, and if side effects don't occur, the dosage can be increased up to 100mg maximum.  There is no need to exceed that dosage, and it should not be run for longer than 5 or 6 weeks.

If used as part of a stack, it is recommended you use trendione to kickstart a cycle, and a smaller dose of 20-50mg per day split is an ample amount.  Many users choose to stack equipoise, testosterone, or primobolan with it.  What's more, some users even choose to stack trendione with deca durabolin, but keep in mind that stacking two progestins should only be done by very experienced users.

When using trendione for the first time, it should be run solo at the minimum dose to see how you react.

Half life
The half life is typical of prohormones at around 6-8 hours.

As mentioned earlier in the article, trendione has been banned due to the recent US legislation on prohormones.  However, it can still be found on the black market, and it is not expensive.

Want to read about Trendione on our forums? check out these threads: