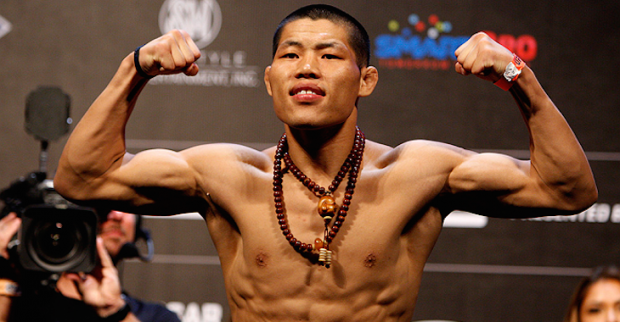 Jingliang tested positive for Clenbuterol in a May 18 out-of-competition drug test. However, USADA found no fault or negligence on his part as an investigation by the United States Anti-Doping Agency found that Jingliang likely ingested the prohibited substance unknowingly into contaminated meat.

Clenbuterol is an Anabolic Agent prohibited at all times under the UFC Anti-Doping Policy, which has adopted the World Anti-Doping Agency (WADA) Prohibited List.

USADA looked at the dietary habits of the Chinese native and whereabouts and cleared him of any sanctions and because of the fact that there were very low parts per billion amount of Clenbuterol in his system. The welterweight fighter (11-4) also passed an in-competition test in relation to his victory over Anton Zafir at The Ultimate Fighter 23 Finale on July in Las Vegas. The Nevada Athletic Commission (NAC) can still suspend him for the positive test of May 18 and the result of his win over Zafir can also be overturned to a no contest by the NAC.

The 28-year-old was one of four UFC fighters to recently test positive for Clenbuterol. The United States Anti-Doping Agency found no fault for Ning Guangyou of China and Augusto Montano of Mexico in their cases and they will not face sanctions.

In another development, USADA announced Augusto Montano ingested Clenbuterol without fault or negligence. Montano, who currently competes in the Welterweight division of the Ultimate Fighting Championship, tested positive for trace amounts of Clenbuterol as the result of an out-of-competition urine sample he provided on May 19, 2016. USADA interviewed Montano on multiple occasions and reviewed the whereabouts and dietary habits of Montano and the laboratory reports demonstrating very low parts per billion concentrations of the prohibited substance in urine sample of the athletes. Based on this information, the United States Anti-Doping Agency concluded that the presence of Clenbuterol in sample of the athlete is very likely resulted from Clenbuterol contaminated meat consumed in Mexico. The investigation of USADA also took into consideration a negative result for a sample collected after the positive test of Montano and therefore the fighter will not face a period of ineligibility for his positive test.

Previously, Ning Guangyou was cleared of wrongdoing after he tested positive for trace amounts of Clenbuterol. The Chinese mixed martial artist who competes in the bantamweight division of the Ultimate Fighting Championship tested positive following an out-of-competition drug test administered on May 19.

In a statement, USADA said it reviewed all of the evidence, including the athlete’s whereabouts, dietary habits, and the laboratory reports demonstrating very low parts per billion concentrations of the prohibited substance in the athlete’s urine sample, and concluded that the presence of Clenbuterol in the athlete’s sample very likely resulted from Clenbuterol contaminated meat consumed in China. It added Guangyou as a result will not face a period of ineligibility for his positive test.