The International Cycling Union (UCI) will review its procedure over granting therapeutic use exemptions (TUEs). This announcement was made after a huge controversy erupted after the world governing body of cycling granted Tour de France winner Chris Froome the right to use a steroid-based drug in April. 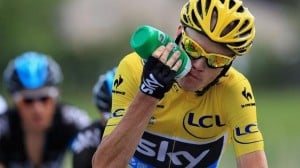 International Cycling Union (UCI) president Brian Cookson remarked we can do a better job and we will now change our procedure. Cookson added we have reconfirmed the members of the TUE commission and we have ensured that from now on decisions about TUEs are not taken by one single individual but taken by a panel of TUE experts.

In a statement, the UCI said it is working closely with the World Anti-Doping Agency and its director-general David Howman. It was added that the UCI has been reviewing all of its anti-doping rules and procedures including those regarding therapeutic use exemptions. It was further added that a completely revised set of rules is in preparation and will enter into force on January 1, 2015 in conjunction with the revised 2015 WADA code and international standards, including the international standard for therapeutic use exemptions (ISTUE). It was also revealed that the UCI confirms all TUE decisions will pass through the TUE committee from now on as an immediate measure.

A few weeks back, it was claimed by French newspaper Le Journal du Dimanche that the UCI did not followed protocols as Team Sky requested a special exemption that allowed Chris Froome to make use of glucocorticosteroids before the Tour de Romandie as the cyclist was suffering from a chest infection. The newspaper reported the UCI does not have the committee of experts to issue the TUEs as has long been required by the World Anti-Doping Agency rules and added it is the sole responsibility of Dr Mario Zorzoli, UCI medical committee coordinator, to grant these authorizations that – as in Chris Froome’s case – can aid performances. Journal du Dimanche newspaper also claimed WADA Director General David Howman is concerned about the UCI’s TUE process and asked it to quickly fix the shortcomings identified in this case.

David Walsh wrote in the Sunday Times newspaper that Team Sky like to portray themselves as the most ethical team in the peloton but the evidence says otherwise.

In response, the UCI remarked that it had followed the rules while granting TUE to Froome. In a statement, the UCI remarked it is important to note that in connection with the TUE granted to Chris Froome, as confirmed by WADA, any rider in the same situation with comparable supporting medical evidence would have been given an authorization to take similar oral treatment.

David Brailsford, Team Sky’s general manager, said we have always stayed within the rules, so we’ve got nothing to hide.

0 0
Previous ArticleThe Power Of The Pump!Next ArticleDoping Belongs To Cycling Past, Says Nibali