Manchester United defender Phil Jones has been banned by UEFA for two European games for abusing a doping control officer following the Europa League final in May. 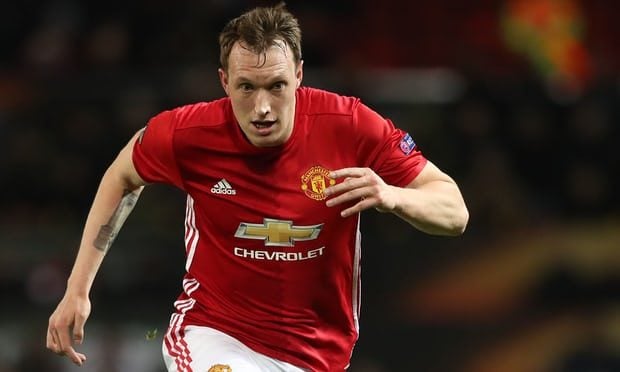 UEFA said the Manchester United club has been charged for infringements of the UEFA Anti-Doping Regulations concerning the doping control procedure. It was added that the player Philip Jones has been charged for insulting and directing abusive language towards the Doping Control, as well as for a lack of cooperation and respect towards the doping control procedure. The Manchester United centre-back, because of this suspension, will miss the Super Cup match of United against Real Madrid on August 8 and its opening Champions League game.

Blind was fined as he failed to take the test to celebrate the Europa League win with teammates. It is believed that Blind was upset to have missed out on a squad photograph taken after the match paying tribute to victims of the Manchester terrorist attack a few days back. Blind expressed this disappointment to officials at the time and did feature on that photograph and did join in some of the celebrations, accompanied by a chaperone. This is allowed in other competitions but was not the case in this instance.

Jones was an unused substitute and Blind played the full 90 minutes against his old club Ajax. There is no suggestion that either player was guilty of doping. The club and both players can appeal.

It was confirmed by UEFA's Control, Ethics and Disciplinary Body that the Manchester United club was fined €10,000 for infringements of its Anti-Doping Regulations, which state that teams are responsible for ensuring that the players drawn to undergo doping controls are taken by the respective team representatives to the doping control station straight from the pitch as soon as the match is over and this applies even when chaperones are appointed by UEFA.

United is understood to be aware of the decision of UEFA and have three days to appeal. The football club has not commented on the matter till now and no decisions have been taken on whether appeals will be made against any of the decisions.

In another development, Eric Bailly was also banned for two more European games for his outburst against Celta Vigo in the semi-final. Bailly missed the Europa League final after he lashed out at John Guidetti in the closing stages of that game. Few days back, he was handed another two game European ban for his clash with Facundo Roncaglia as the players left the pitch. He will miss the Super Cup and the first game of the Champions League group stage. The defensive options of José Mourinho in Europe had already been depleted with the ban on Bailly. Mourinho increased the depth of United at the back by signing the Sweden international Victor Lindelof from Benfica.