UFC fighter Frank Mir, one of the undisputed greats of the Octagon, has been flagged for a potential doping violation, according to an announcement by the UFC. 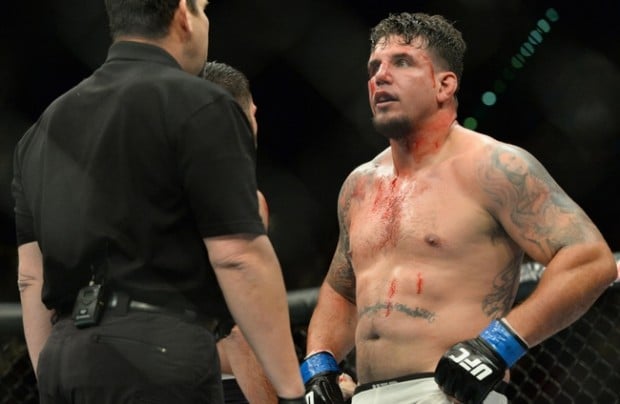 Frank Mir defended himself and said he never took any performance enhancing drugs and did not take what came back in his positive drug test. In a statement Mir released on Friday night on social media, the two-time UFC Heavyweight Champion said he is not aware how he could have tested positive for any banned substance and denied using any performance enhancing drug. Mir said to all his fans and supporters to hold judgment against him until all the facts have been revealed and said he had never tested positive for a banned substance since joining the UFC and becoming a two-time UFC Heavyweight Champion.

The former UFC heavyweight champion who holds the record for the most win, most fights, and most submissions in his division was recently knocked out by Mark Hunt just three minutes into the main event of Fight Night 85. The United States Anti-Doping Agency has remarked a sample provided by Mir on night of the fight has been flagged for a potential doping violation.

The 36-year-old Vegas-born Mir has previously never failed a drug test in his career. Mir was an approved user of Testosterone replacement therapy until the treatment until TRT was widely banned in combat sports in 2014. Mir (18-11) will have the right to request for his B sample to be tested along with the right to appeal. The American mixed martial artist is 2-6 in his past eight fights, including three knockout losses, but publicly stated that he has no plans of retirement.

In a statement, the UFC said it was notified that the USADA has informed Frank Mir of a potential Anti-Doping Policy violation. The statement further reads that the violation stemmed from an in-competition sample collected the day of Mir's fight on March 20, 2016 in Brisbane, Australia. It was also remarked that USADA, the independent administrator of the UFC Anti-Doping Policy, will handle the results management and appropriate adjudication of this case involving Frank Mir. The UFC statement also reads it is important to note that, under the UFC Anti-Doping Policy, there is a full and fair legal process that is afforded to all athletes before any sanctions are imposed. Under UFC and USADA guidelines, sanctions can include temporary bans from competition, or forfeiture of results, titles, and earnings from bouts.

Frank Mir is the only person to win a UFC bout by toe hold and considered one of the top submission artists in the UFC Heavyweight division. Mir earned his black belt when he was a teenager and met UFC matchmaker Joe Silva at a BJJ school where his potential was seen by Silva. Frank Mir made his professional debut on July 14, 2001 against Jerome Smith at HOOKnSHOOT: Showdown and won the bout by unanimous decision after two rounds. Mir made his UFC debut against 6th degree BJJ black belt Roberto Traven on November 2, 2001 at UFC 34: High Voltage and defeated the 1999 ADCC Submission Wrestling World Championship open class champion to earn "Tapout of the Night" in the process.