Kelvin Gastelum, the American professional mixed martial artist who is currently signed to the Ultimate Fighting Championship, has been pulled by UFC from the fight scheduled for UFC 212 in Brazil this June against Anderson Silva. 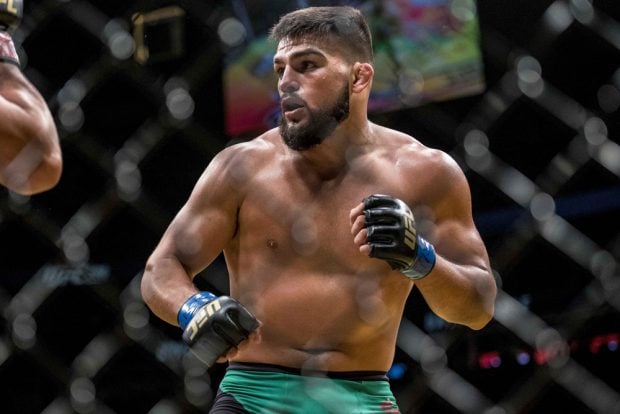 Gastelum, the winner of The Ultimate Fighter 17 over Uriah Hall by split decision in 2013, was flagged for a potential anti-doping violation by the United States Anti-Doping Agency. The positive test of the UFC contender was triggered by marijuana metabolites during an in-competition test for his fight in March against Vitor Belfort.

Gastelum (14-2) was coming off a violent first-round TKO win over Belfort at UFC 106. The win also earned Gastelum his second Performance of the Night bonus award. The victory marked the second straight win for the Yuma native since he made the jump up to 185-pounds after decimating former Strikeforce title contender Tim Kennedy at UFC 206 in December. Gastelum faced Nico Musoke on June 28, 2014 and won the fight via unanimous decision at UFC Fight Night 44. Gastelum won the fight against Jake Ellenberger on November 15, 2014 at UFC 180 as the co-main event that earned Gastelum his first Performance of the Night bonus award.

Gastelum has been placed under a provisional suspension by the UFC. It was announced by the UFC that Gastelum had been flagged for a potential Anti-Doping Policy violation involving Carboxy-Tetrahydrocannabinol (“Carboxy-THC”). Carboxy-THC is a metabolite commonly found in marijuana and the UFC contender tested above the decision limit of 180 ng/mL.

The Brazilian MMA Athletic Commission (CABMMA) was the regulatory body overseeing the fight and has licensing jurisdiction over Gastelum. Therefore, USADA will work to ensure that the Commission has the necessary information to determine its proper judgment of the potential anti-doping violation of Gastelum.

The UFC has scrapped the bout between Silva and Gastelum at UFC 212 in June. Silva (35-8), who is widely considered the greatest fighter in UFC history, currently holds several UFC records including the longest win streak in the history of UFC. All but three of Silva’s wins to date have come by way TKO, KO, or submission. His longest win streak included a UFC title reign that lasted a company-record six years, eight months and 22 days. Representatives from Silva’s team remarked the former UFC middleweight champion still wishes to remain on the card though his new opponent is still unnamed.

A featherweight title unification bout between Jose Aldo and Max Holloway will serve as the main event. UFC 212 goes down on June 3 at the HSBC Arena in Rio de Janeiro.

Currently competing as a middleweight and is ranked #8 in the UFC official middleweight rankings, Gastelumwas a state championship wrestler at Cibola High School in Yuma. Gastelum made his professional MMA debut on December 11, 2010 where he won via submission due to punches in the second round. He then amassed an undefeated record of 5–0 following his debut and had finished every opponent he had faced with 2 TKOs and 3 submissions on his record.