Last year, the US government began the 'Operation Cyber Juice,' which was put in place to go after those selling anabolic steroids in the USA (domestic suppliers).  Since then, we have seen over 100 people arrested, and many so called 'underground labs' (UG labs) have been taken down.  For instance, this week Tammy Dickinson (US Attorney for the Western District of Missouri) announced that a couple with two more accomplices have been indicted for their role in a $2.25M conspiracy to sell illegal anabolic steroids via a USA domestic UG lab Power Trip via the internet./>

The couple - Aaron Schweidler and Nicole Lyne, are from North Carolina, and the 2 accomplices Michael Peters and Samuel Miller are of NH and MD.  They were charged in a 9 count indictment by a federal grand jury in Kansas City on Feb 2nd 2016.  Some of the charges are conspiracy to manufacture and distribute anabolic steroids, money laundering, identity theft, and debit card fraud.  Interestingly, Miller is a fugitive on the run, while the other 3 have been brought into custody.

Performance enhancing drugs (PED) like anabolic steroids have been used by athletes for many years, so they are found everywhere - from on school campuses, to local gyms, and all the way up to professional athletics.  This is not surprising, as everyone wants to get an edge, and anabolic androgenic steroids (AAS) can provide a very good edge over the competition.   AAS can improve recovery, increase muscle mass, boost metabolism, and give incredible strength.  What's more, with the improving economy and the simple access to steroids through the internet, it is as easy as ever to acquire them.  However, many anabolic steroids are illegal, and just a few of them (like testosterone for example) are legal with a prescription only.

Back in the day, you would get steroids through your coach, trainer, or the local meathead in your gym.  Nonetheless, now with the growth of the internet and steroid forums, you can easily find them online.  This is where underground labs (UGL's) have sprung up all over the country to cater to those who want to acquire these potent hormones in a modern way.  However, keep in mind that underground labs are not pharmaceutical companies.  They import raw powders from China (which are usually contaminated or fake), make the steroids in their toilet or bathtub, then bottle them and sell these steroids to people for huge profits, which is a felony (10 years in jail).  Furthermore, they do their best to hide the profits from the authorities, which in itself is illegal (money laundering).

How they did it

In this particular case, the defendants started their UGL called Power Trip back in 2011, and they sold their steroids to many people, including minors and athletes.  As a matter of fact, over several years they sent about $200,000 to China for the raw powders.  It has been reported that they produced their steroids in an ordinary home under unsanitary conditions. 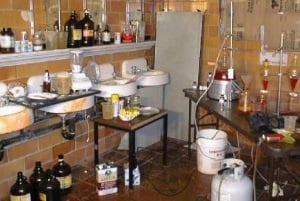 Additionally, they would steal identities, either purchased or stolen from victims, and had the buyers send them money to Moneypak, Reload, and Blackhawk in order to conceal the earnings.  Two of the individuals were likely 'remailers,' meaning they would send the steroids to the customers from various locations for a piece of the profits.  For additional concealment, the return address would show up as "Hype electronics and Game Super store."

In the end, the group is alleged to have made $2.25M in the scheme, which has been seized by the authorities.  Their net profit is $0.00 (zero).

It is not clear if the customers' names will be part of the investigation.  However, if you have bought enough to consider it 'intent to distribute,' (more than 5 bottles) then they would possibly open an investigation on you too.  Therefore, it is important to remember the dangers to buying steroids from underground labs in the USA, as the chance of them being busted is very high in this environment, especially when they are selling their products to higher profile athletes and minors.

Want to read about UG Labs on our forums? check out these threads: