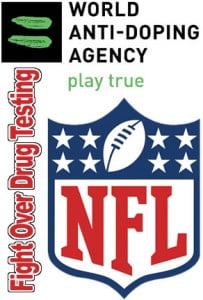 The World Anti-Doping Agency, on eve of the latest showpiece game of NFL at Wembley, has issued a warning to the American Football that it should make its drugs policy more transparent else fans would believe the sport has something to hide.

The director general of WADA, David Howman, voiced his frustration that blood testing in the National Football League for human growth hormone had been delayed by the players' union, who had tried every possible way to avoid testing. In 2012, 26 players were suspended for violating the substance abuse policy of the NFL. However, some commentators believe these figures may be higher if blood tests for HGH were introduced.

Under the collective bargaining agreement of NFL with the players' union, the league is not allowed to declare which substance is taken by a banned player. Howman said there is a lack of transparency in the process and that is part of what we are trying to persuade them to alter and added but this is what comes about through collective bargaining because you get people holding out for something that may not be to the benefit of the greater good, it is a weakness of the process. On the other hand, Aldopho Birch, the NFL's senior vice-president of law and labor policy, remarked he believes the substance abuse policy of the NFL would be more open in the times to come and remarked we have been proposing the ability to disclose the substance and nature of drugs violations and this is not just to inform the public but as an educational deterrent too.

The biggest cause of concern is that the players' union is of the strong view that player welfare must be the priority. The current protocols catch cheats while also supporting its players, insisted George Atallah, assistant executive director of external affairs at the NFLPA, and added that our role as a players' union is not just to catch athletes that violate our policy but to protect their rights and confidentiality, and to provide them with the best possible treatment. Atallah said we believe the scientific baseline for their HGH test is not accurate and, as in the case of Andrus Veerpalu at the Court Of Arbitration For Sport earlier this year, procedural flaws could lead to false positives. Which is why we want a population study and added it would be the most scientifically valid baseline in all sports.

The WADA chief also remarked there are very light suspensions in NFL. In the sport, a player is banned for just four matches for a first offense involving performance enhancing drugs while there is a ban of eight games for a second doping offense. The NFL, however, thinks that the lack of repeat offenders demonstrates that their policy is working. The lack of a test for human growth hormone in the NFL was pinned firmly on the Players Association by Howman who remarked we thought when drug hormone testing was initially agreed in 2011 that this was the best thing that the NFL players could do to show the public they were clean. Howman added but the Players Association has used every possible way of avoiding testing, which to him is: these protesters have something to hide and why would you do that if you thought your players were all good guys and all clean and not taking performance enhancing drugs.