Creatine is the most widely used performance-enhancement compound in the world, and has been used for the past 20 years. Industry statistics show that more and more creatine is consumed every year by athletes around the globe. The reason why creatine continues growing in popularity among athletes is simply because it works. 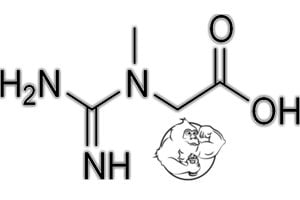 Most guys taking large amounts of anabolic steroids stack creatine in their cycle to improve how well the steroids work. Taking loading doses of creatine can cause you to gain up to 5lbs in muscle size within the first 10-15 days of use.

Using creatine while on steroids improves the overall results from your cycle, because it has a synergistic effect on muscle growth with other anabolics. Bodybuilders on a steroid cycle love creatine since it adds volume to their muscle mass and strength on their lifts.

Natural athletes use creatine because it enhances performance by delaying muscle fatigue, and it’s still compliant with most sports organizations. Whether you’re a competitive athlete who’s subject to drug testing, or a steroid user just looking to build mass and look good, creatine is useful for your goals. 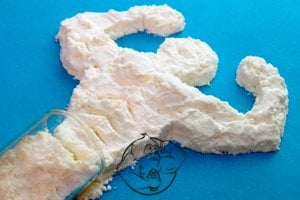 Cheap and plentiful creatine can be found all over the market since it’s so popular. Supply has increased exponentially throughout the years to meet this demand. But things weren’t always this good for creatine-loving athletes.

The first creatine product to hit the broad market was called “Phosphagen,” and it was marketed by a company called EAS back in the mid 90’s. It was a small bottle of Creatine Monohydrate that cost over five times the price that the same amount of creatine will cost you today. Today, creatine is plentiful and comes in different versions that have improved characteristics from Phosphagen.

Although there are many new forms of creatine being made today, three products really stand out as favorites among athletes and bodybuilders. These include: Creatine Monohydrate, Creatine Pyruvate, and Creatine HCL.

These three are among the most popular forms being used today. And there’s good evidence that stacking the three creatine types in small amounts yields much better results than just using a large dose of one version. Many guys who want to harness the power of all three creatine types will eat the expenses and buy a separate bottle of each.

But an even better choice is to just use “Ancient Strength,” which contains all three forms in one bottle and saves you a lot of money. 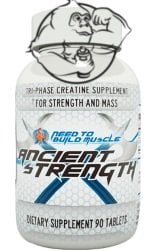 Ancient Strength is a creatine product by N2BM Nutrition, a company that specializes in making products for guys who use steroids. It’s a very inexpensive and completely natural way to feed your muscles on a daily basis.

Ancient Strength comes in tablet form, so you don’t have to worry about any mixing. And since there’s no mixing, it doesn’t contain sweeteners, dyes, and other things to make it taste or look good to appeal to naive consumers. Ancient Strength creatine can be used by anyone, no matter their experience in the gym, and has been proven to work for many bros on steroids.

When it comes to creatine, the selection of possible products you can buy is enormous, and you can easily get confused. In this case, N2BM Nutrition the makers of Ancient Strength, really took out all of the guesswork of buying the right creatine supplement to go along with your steroid cycle, TRT, or even SARMS cycle.

When taking Ancient Strength, you’re guaranteed a good dosage of three different creatine types that will cover each angle and work synergistically with your steroid cycle. This tiny, inexpensive bottle of creatine helps you get the most out of your steroid cycle. And you can multiply your gains on the same steroid dosages just by adding this creatine.

It just makes sense to get the most out of each and every steroid cycle you run. And stacking an inexpensive extra like creatine is the smart way to ensure you get the very best results.

Where does Creatine Come from?

Creatine is simply an amino acid that’s produced naturally in our bodies. It’s consumed when you eat certain foods like fatty fish, eggs, and red meat. 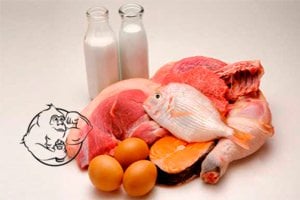 The way creatine works within the body is that it increases the size of our muscle cells, by increasing the volume of water the cell can actually hold onto. With food, you’ll never take in enough creatine to really see a huge difference in muscle growth or performance. To see the anabolic benefits of creatine, you have to super-dose creatine in powder or pill form.

Even if you eat 15lbs of beef, you would still not get half the amount of creatine that’s in a single daily dosage of Ancient Strength. You need super amounts of creatine for it to have truly profound anabolic effects.

“This seems Simple, but how does It Work? Give Me the Science, Simplified Bro!”

Creatine helps you fatigue much slower because it refuels adenosine triphosphate (ATP) to the body. In turn, the body has more energy and ways to obtain phosphates needed for ATP at a much more efficient pace. What this translates to in plain English is that you’ll be able to train longer and harder, and have an easier time growing muscle and strength.

On top of giving you more energy for training, the saturation of creatine in your muscles cells causes intramuscular water retention, thus giving fuller and more pumped muscles. It’s the compounding effect of added energy production, along with the hyperhydration of your muscles that creates the right environment for steroids, SARMS, and other anabolic compounds to really help you build more mass.

What can I Expect from using Ancient Strength Creatine?

People don’t realize that when they lift weights or do cardio, they’re breaking down muscle fibers. The faster you can recover from your intense workouts, the better you can perform on your next session, and the more you improve.

Yes, it’s true that our muscles are mostly water, and creatine will increase the amount of water held in muscle cells. So when you use Ancient Strength, your muscles will in fact grow. But just as importantly, Ancient Strength will positively affect nitrogen balance. 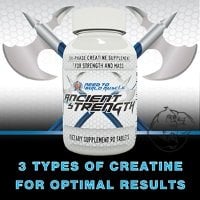 Ancient Strength creatine is completely safe to use.

In fact, creatine is allowed by the OIC, NCAA, and most professional sports. They can’t ban something that’s naturally found in the body. Otherwise, they’d have to ban you from eating red meat or fish too.

The real trick here is that you’re taking in more creatine than you ever could from meats. And you’re taking it in forms that your body is able to utilize for muscle growth, like Creatine HCL or Creatine Pyruvate. 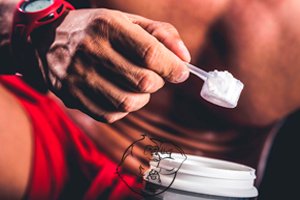 Simply make sure you’re hydrated when taking it since Ancient Strength causes muscles to draw extra water from the rest of your body. You want to increase your water intake at the same time you begin loading up with creatine, because this is crucial for it to work properly.

Short term (5 days), medium term (9 weeks) and long term (up to 5 years) oral creatine supplementation has been studied in small cohorts of athletes whose kidney function was monitored by clearance methods and urine protein excretion rate. We did not find any adverse effects on renal function.

Some people complain that they have an upset stomach with creatine. But this is because they’re using mixes with dyes and food coloring – rather than Ancient Strength creatine, which is a tablet that’s easy to digest.

What are the Ingredients in Ancient Strength?

With Ancient Strength creatine, you get 3 types of creatine, which work in perfect synergy together, and with steroids or SARMS to fuel your body for maximum growth!

This is the gold standard of creatine on the market. Monohydrate is also the very first to be made commercially available and is still favored by many bros. The Monohydrate in Ancient Strength is affordable, safe, and proven to work in studies over the last 20 years.

When HCI hits your stomach, it’s turned into a basic creatine molecule, making it more water soluble than other types of creatine. Some of the top selling brands in the nutrition industry sell this form of creatine since it’s very powerful in small amounts. Here in Ancient Strength, you get a nice 300mg per day dosage that works well with the other two forms of creatine in the product.

Added to boost higher plasma levels, this form of creatine has substantial research backing it. Many athletes prefer Pyruvate over other creatine forms since it works very quickly, giving you noticeable size gains within the first few days of use. It’s a great ingredient to round off this already powerful creatine formula, making Ancient Strength the very best creatine supplement any steroid user can buy.

How to Use Ancient Strength

One way that bros can use this product is by taking 4 tabs of Ancient Strength for the first 5 days of use, as a “loading phase,” then just 3 tabs per day thereafter.

Some guys will repeat the loading phase every 4 to 6 weeks, by just increasing from 3 to 4 tabs for 5 to 7 days, every month; or month and a half. 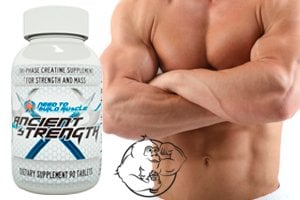 When in the Day should You Take Creatine?

Most bros try to take their creatine on an empty stomach, with some sweet juice, and spread their dosage throughout the day. Other guys take their whole creatine dosage all at once before working out.

Both ways are okay, but we suggest you take one tab in the morning on an empty stomach, along with the other compounds you take in the morning. Then take two tabs before training with your pre-workout meal.

Athletes taking creatine with their steroids has been going on for decades now. This is accepted as a very effective practice, as most guys notice much faster gains on their cycle when the creatine is added.

As far as the performance enhancement end of things, creatine is just very effective and literally puts more gas in your tank for those grueling training sessions – this is all well documented.

Ancient Strength is just a great creatine supplement that adds the power of 3 different types of creatine to help guys get the most out of their steroid cycles, or even their SARMS stack. Whether you’re running a huge bulking cycle or hitting a good cutting stack, Ancient Strength should be included in every cycle.