There are two names that are most likely to be responsible for steroids being banned today: Olympic sprinter Ben Johnson, and American Football player Lyle Alzado, who was known for an extremely intense and intimidating playing style, spanning 15 seasons in the NFL. Interestingly, Lyle was definitely not the biggest, strongest, or fastest player to play his position, but he made up for it with his intensity and heart. In fact, he was responsible for the rule against ripping off an opponent's helmet and throwing it, since he would do it all the time.

However, Alzado is best known outside football for being shown struggling to even walk, when he did an interview on a national TV show during his final year while dying of brain cancer. In that interview he blamed steroid use for his condition. As a result, people were shocked to see a tough player who was considered invincible fall that much because of what they assumed was steroid abuse. 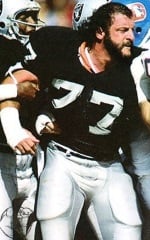 Alzado grew up in Brooklyn and Long Island. Sadly, his father was a drinker and street fighter, who abandoned their family when he was in high school. After high school, Alzado did not get a scholarship offer to play football in college, so he bounced between two obscure small schools (Kilgore and Yankton College), and he also participated in boxing. By luck, a scout for the Denver Broncos saw him play after his car broke down, and he was interested. The Broncos took the little known player in the 4th round of the 1971 draft.

Once again, Alzado had a stroke of luck during his rookie year in the NFL when the Broncos' starting defensive end became injured. As a result, Alzado filled in to get 8 sacks, and the next year he started getting national attention, as he had over 10 sacks with 90+ tackles, leading the Broncos to their first winning season ever. Unfortunately, Alzado suffered a blown out knee in 1976 and missed the season, but he came back the next season to help his team go 12-2 and make the Super Bowl. What's more, Lyle became a household name after that, as he won AFC defensive player of the year. As a matter of fact, during this time Alzado played both defensive end and tackle. 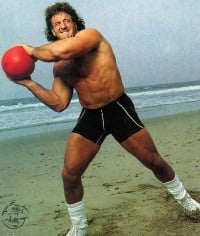 In spite of good performance on the field, in 1979 Alzado had a contract dispute, so the Broncos traded him to the Browns, where he continued his stellar play for a couple years before getting traded again, but this time to the LA Raiders. Then, Alzado led his team to a Super Bowl win in 1983.

Due to some injury problems Lyle Alzado retired in 1985 with a total of 112 sacks, 24 forced fumbles, and 1000 tackles for his career.

Alzado became one of the first major American sports figures to actually admit to using anabolic steroids. At the time, athletes were not tested for anabolic steroid use in the NFL, and Alzado said he had abused them since 1969 (while in college). Furthermore, he also flat out blamed steroids for his brain cancer and his health problems when he was featured in an article by Sports Illustrated. In that article, he said steroids were addicting, especially mentally addicting, and now "I'm sick and scared." Additionally, he also called out his peers saying that 90% of them are on steroids, and "we are not born to be 300 pounds or jump 30 feet."

He said that steroids made him play better, but, at the same time, they made him violent, on and off the field. For instance, he even recalled a story when he was in a minor car accident, and he ended up beating up the guy who ran into his car. He then said "Now look at me. My hair's gone, I wobble when I walk, and I have trouble remembering things. My last wish? That no one else dies this way." 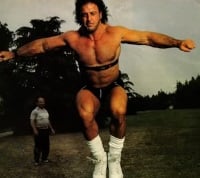 Alzado's story of steroids causing his brain cancer has been debunked by steroid expert Norm Fost, as the lymphoma of the brain had not been linked to steroid use. As a consequence of his condition, Alzado died in 1992 at age 43.

Speculation of what steroids he used

Alzado admitted freely to using steroids since he was in college, and he was untested his whole career, so we can point to the anabolic steroids that were most popular during that time and take an intelligent guess at what he took.

In those times dianabol, deca durabolin, testosterone, and primobolan were obvious choices. Moreover, there is also talk of guys from the late 70's claiming that growth hormone was accessible under the brand name of crescormin (cadaver based GH), but it was so expensive, that only a pro athlete could afford it.

Alzado's story was featured in the documentary 'Bigger, Faster, Stronger,' and also in an episode of “Real Sports on HBO.” Both videos can be seen on youtube.

Nowadays, it can be argued that Alzado's legacy has led to increased laws against steroid use, media and public figure outrage, as well as the conventional wisdom of the ill-informed claiming that steroids cause brain cancer and death.

Even though steroids can contribute to liver and heart strain, the dangers are greatly exaggerated. Nonetheless, being seen on national TV limping, after being a violent football player, Lyle left long lasting impressions on an entire generation, and it is not likely that steroids will be accepted by the general public any time soon.

Want to read about Lyle Alzado on our forums? check out these threads:

*DISCLAIMER: The cycle above is our opinion on what Lyle Alzado could have used, this is for information and entertainment purposes only. There is proof Lyle Alzado used steroids, but not which ones. All information expressed is per 1st amendment rights, this article is in compliance with all legal articles of free speech and is our opinions not facts.