"There wasn't a defensive back in the world ready to out-muscle a wide receiver with 21 inch biceps." This was a direct quote from a sports writer when describing possibly the most freakish wide receiver of all time - David Boston. Sadly, his amazing talent was only on display sparingly during his disappointing NFL career, which was ruined by his attitude, failed PED test, off the field problems, and injuries. However, during the couple of years when he was playing up to his ability, David was unstoppable. 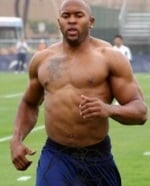 David Boston grew up in Texas, and he was recruited to play at Ohio State for the Buckeyes, known for a very strong football program. There, in 3 years he set school records for pass receptions, catches per game, and yards. All in all, David scored 36 touchdowns, 2855 receiving yards, and 191 receptions throughout his college career. In fact, he is known for catching a game winning touchdown in the 1997 Rose Bowl.

Even though he left college a year early, Boston was seen as the most freakish talent that season, and was easily a top 10 pick in the 1999 NFL draft. So it is not surprising that the Arizona Cardinals liked his 6'1" 225 pound muscular frame and selected him early in the 1st round. Their hope was that he would be an unstoppable force on their improving offense playing a pass catcher on the outside, who would yet be capable to out-muscle smaller defenders for the ball.

As a result, during his rookie season David Boston showed glimpses of that talent, as he hauled in 40 catches in 473 yards with 2 touchdowns. The next season he improved to 71 catches for 1100 yards with 7 touchdowns. Then, in 2001 he had a monster year, hauling in 98 passes for 1600 yards, and 8 touchdowns. This led David Boston to be selected as an All-Pro, which gave him an invitation to the pro bowl.

Boston parlayed his first 4 years of success in the NFL into a $47M contract with the San Diego Chargers in 2003. He had a good year with 70 catches for 900 yards, and 7 touchdowns, but he did not get along with his coaches, who sited his poor practice habits and his moody personality. Consequently, the Chargers decided to trade him away to the Dolphins for a late round draft pick, angering some of their fans who felt like they had just traded away one of the most talented players in the league for virtually nothing. Interestingly, during this time he had been arrested for driving while on drugs, and also for assaulting an airport agent, so logically the Chargers wanted to move on from his unpredictable attitude.

Nonetheless, David never got a chance to even play for the Dolphins that season, as he was suspended for 4 games due to testing positive for steroids, and he also tore ligaments in his knee before the season started. At the end of this season the Dolphins cut him to save money, then re-signed him back for the minimum in 2005. Unfortunately, the next year he managed to play only 5 games, contributing just 4 catches, before once again tearing knee ligaments.

In 2006, the Tampa Bay Bucs decided to give David yet another chance, but he did not get to play for the Bucs either, since he was arrested for DUI and for using GHB, which led to his release from the team.

He tried football one last time for the Toronto Argonauts of the Canadian Football League. However, yet another foot injury forced David to have surgery, and his season was ruined again.

Boston was caught using steroids, and suspended for 4 games during his first year in Miami. As a matter of fact, this suspension took place at the same time as he tore the ligaments in his knee. Interestingly, we have seen a pattern of players who abuse performance enhancing drugs, and tear their soft tissues. The reason for this is if you become too muscular and strong for your ligaments to handle, they can tear much more easily, even without physical contact. Therefore, this coincidence explains why the number of NFL athletes to have major ligament injuries has skyrocketed - human growth hormone (HGH) and steroid use has become more prevalent in this league.

Furthermore, he was also found to have taken GHB, which is used by athletes to elevate human growth hormone in vivo.

We do know that GHB was definitely something Boston used following 2 ligament injuries to his knee. This would make sense, as he was attempting to recover from his injury. In spite of the fact that we do not know what kind of steroids David used previously, we can guess that maybe it was trenbolone and testosterone because of his moodiness and incredible strength displayed. As it is well known, trenbolone can cause personality issues and impatience due to its androgenic properties, which many people refer to it as 'tren rage.' It is also probable that Boston abused human growth hormone throughout his NFL career, since at that time it was not tested for, and it is very hard to detect HGH even when it is being searched for. 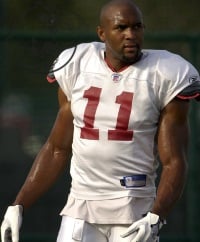 DISCLAIMER: The cycle above is our opinion on what David Boston could have used, this is for information and entertainment purposes only. There is no proof David Boston used steroids. All information expressed is per 1st amendment rights, this article is in compliance with all legal articles of free speech.