If there were ever a narcissistic example of the younger generation's vision of fitness, Jeff would definitely be first on the list, and Jeff Seid would be a close 2nd. Interestingly, it wasn't always like that, as Jeff was originally just an ordinary high school kid playing football and wrestling. However, a series of circumstances led him on an entirely different route - at 6' tall and 210 pounds Seid had become an IFBB Pro before he was even old enough to drink alcohol. 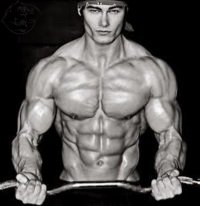 When Jeff turned 12, his parents gave him a weightlifting book and a weight set because they wanted him to gain confidence and get into better shape. In fact, he freely admits that his primary goal as a teenage weightlifter was to get girls. Nonetheless, he also saw weightlifting as a way to do better in sports because he went to a competitive high school and that was important for him.

Jeff was destined to get a wrestling scholarship, and, perhaps, even impress some college football scouts too. Unfortunately, Seid's dreams were shattered when he blew out his knee during the 1st football game of his senior season. As a consequence of that injury, he had ligament surgery and was not allowed to run for a while.

Nonetheless, after initially being depressed, he did not give up. Jeff ended up using the physical therapy and rehab to transition into pure bodybuilding and weight training. But another misfortune was waiting for him around the corner, and as a result of his impatience, Jeff once again tore the knee after just three months.

Before he was set to go under the knife for his first knee surgery, Jeff said he was browsing online forums and learned about a new category in the IFBB called "Men's Physique." Incredibly, one year later and after two knee surgeries he won Nationals and made history as the youngest IFBB Professional ever. What's more, two months after that Jeff won his first Pro show, which meant he was able to step on stage at the first Mr. Olympia Men's Physique Showdown. Therefore, it is not surprising that being less than two years out of high school, Jeff was already extremely popular. 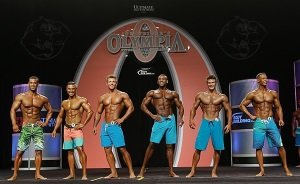 Career in fitness and social media

After his very young success, Jeff's career took off as he started flying around the world for appearances and monthly expos. In addition to that, Seid parlayed his popularity at a very young age with a clothing company called "SeidWear," and quite a long book called "Guide to Aesthetics." 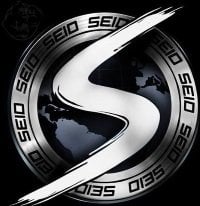 Furthermore, he also does online personal training, makes a lot of money from social media, and continues growing his writing and clothing ventures. In fact, Jeff Seid's social media pages are followed by a tremendous amount of fans, and he is especially popular among the teenager and 20 something age groups. For instance, his YouTube channel has almost 1M subscribers, and some of his videos have 1M views or more.

What's more, Seid also has a 6 figure follower count on Twitter (https://twitter.com/jeff_seid) and whopping 3M followers on his Instagram and Facebook pages (https://www.instagram.com/jeff_seid and https://www.facebook.com/officialjeffseid/ respectively).

Seid's social media postings and videos show his journeys around the world, logs of his workouts, his preparing for shows (including the Olympia), and day to day updates on his life.

Unlike some other superstars in the fitness world, Seid avoids negativity and does not typically react to them. The main criticism surrounds his insistence that he does not use PED's, and Jeff's claims that his success has been due to special workout programs and coaching. By saying this he implies that you should buy his programs for hundreds of dollars, and you will be like him.

Jeff also pushes products he recommends, making a commission from the sales of these products. This type of thing is completely normal and common in the fitness world, which makes him an easy target to be called a so called 'Fake Natty.'

For example, Luimarco also took aim at Seid's photoshopping. In this video, he shows evidence that Seid does, in fact, photoshop his pictures. However, you got to keep in mind that in modeling and fitness world photoshopping is normal and it is done all the time.

Seid is an advocate of HIIT (High-intensity interval training), so when it comes to cardio, he does a very intense workout for 10 minutes, being the bicycle his favorite exercise. His weight training is quite intense as well, and he seems to employ volume and supersets to his routines.

Unlike many athletes, he targets the calves and abs frequently during the week. Obviously, he also works hard on the larger muscle groups like the chest, shoulders, back, and legs once or twice per week.

Jeff typically does four sets of 8-15 reps per exercise and a total of 20-30 sets per day, or slightly more. He uses the weekends to enjoy the social scene and rest from the gym as a reward for the week's hard work.

Like most athletes these days, Seid follows a strict diet of lean protein, healthy fats, and good carbohydrate sources. His diet has been 8 meals a day, 2 of which are protein shakes and a piece of fruit. A typical breakfast for him would be egg whites, 1/2 cup oatmeal, and a fruit. An example of dinner would be a small steak, sweet potato, and green veggies.

We know that to compete at the level of Jeff Seid you need to use PED's. It is admirable that he claims that he is natural, but we can speculate his steroid cycle * looks similar to this:

Want to discuss Jeff Seid on our forums? click here and discuss him...

*DISCLAIMER: The cycle above is our opinion on what Jeff Seid could have used, this is for information and entertainment purposes only. There is no direct evidence that Jeff Seid used steroids.