Another day, another bust.. this time in Canada.  Mission Labs

It was reported on March 6, 2017, that the Royal Canadian Mounted Police along with the Ontario Provincial Police, Owen Sound police dept, and Canada Border Services Agency took down a steroid outfit on March 2nd.  Two Sauble Beach residents were arrested for production and trafficking regulated steroids and pharmaceuticals.

The two individuals used their residence and a business location in Owen Sound, Ontario, which is a small town on the border of Michigan.  The two-month investigation resulted in search warrants and multi kilos of steroids, firearms, and other illegal substances were seized.  They also found a very elaborate lab with equipment to manufacture steroids.

The names of the two individuals are Michael Kidd and Sarah Posthumus.  They face multiple charges including:

On March 3rd both individuals appeared in court to face their charges and will be going back again.
Kevin Nicholson, who is the RCMP Toronto West Detachment, Serious and Organized Crime division inspector said "A key supply chain that distributed large amounts steroids has been disrupted. Those who produce and traffic in illicit drugs put persons health and safety at risk. The RCMP remains fully committed to enforcing laws against illicit drugs to their fullest extent." 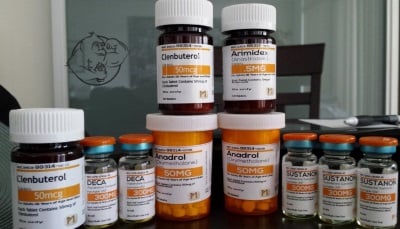 This situation is especially shocking because Mission Labs operated on dozens of steroid websites online, even openly on Reddit.  Forum members are reporting that their payments are still being accepted, but communication has ceased, so it appears those funds will be gone for good.  It is recommended to avoid this source.

DO NOT SEND THEM MONEY!