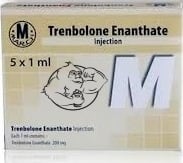 Trenbolone enanthate (or Tren E, TE), unlike testosterone-based steroids, does not result in the development of feminine sexual characteristics in men. This steroid has the ability of stimulating protein synthesis gains that prove useful in new tissue formation that, in turn, promote muscle growth or hypertrophy. Moreover, this steroid is used by those into boxing, MMA, and cycling as it helps with strength and speed.  TE can demonstrate unmatched efficacy in reducing body fat levels as it has a strong cortisol-reducing effect along with the ability to bind to the glucocorticoid receptor. 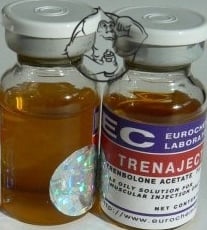 Trenbolone Acetate (or Tren A, TA) has the molecular formula of C20H24O3 and has an anabolic-androgenic ratio of 500:500. It has an active life of 2-3 days and has the molecular weight of 270.3706 g/mol at the base. Trenbolone Acetate, a 19-nor steroid, is derived from the compound Nandrolone.  It is characterized by strong androgenic properties and no estrogenic activity. This anabolic steroid has a binding affinity for androgen receptor five times the strength Testosterone. Trenbolone acetate is admired globally by elite athletes as it can dramatically improve the uptake of nitrogen by muscles and improve the level of protein synthesis. Ideal for cutting cycles, Tren A does not get metabolized by aromatase or 5α-reductase into estrogenic compounds like estradiol or into Dihydrotestosterone (DHT).

The primary difference between Trenbolone Acetate and Trenbolone enanthate is esters. While Tren E, featured by comparatively less esters, peaks at a slow pace and leaves the system slowly, Tren A with more esters peaks faster and leaves the system faster.  Moreover, Tren A is better when it comes to maintaining stable blood levels, especially when athletes want to gain muscle mass and strength when following a dieting regimen. Furthermore, the human body finds it simpler to absorb a higher percentage of milligrams when injected with the acetate form rather than in the enanthate form.

A big majority of athletes and bodybuilders, especially those into elite sports and professional bodybuilding, prefer Trenbolone acetate over Trenbolone enanthate. This is because the enanthate version of Trenbolone doesn't result in as much hardening of muscles as experienced with the acetate version. While the acetate version is known to promote cutting, the enanthate version is used for adding muscle size. Beginners to the world of anabolic compounds should opt for Tren A instead of Tren E as Tren acetate gets out of the system quickly. However, the enanthate version of Tren is rarely associated with night sweats, insomnia, and over-aggression and allows athletes to reap the optimum benefits of the potent steroids.  Tren E is less likely to result in the dreaded Tren cough and involves less pinning but the use of this steroid involves more of patience as results can take time.

The fact that Trenbolone acetate is easily and more readily available puts it ahead of the enanthate version. In addition, this short ester compound is better than enanthate version when it comes to controlling and manipulating blood levels.