Antonio Gates is a pro football tight end for the San Diego Chargers, and he has played in the NFL for 13 years so far. He is known for the incredible reach of his hands, his ability to snatch a football with one hand, and the skill to outjump defenders to snag the ball away. In fact, Antonio is on track to make it into the hall of fame, which is not surprising based on his prolific statistics and his incredible 8 straight pro bowl appearances. Additionally, he is a member of the NFL 2000's all decade team and member of the 10,000 receiving yards club. What's more, Antonio currently owns the Chargers' all time records for receiving yards, catches, and touchdowns. 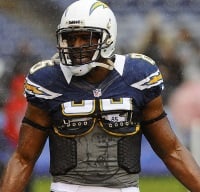 Interestingly, Gates was a very talented basketball and football player. However, during his first year in college at Michigan State, Nick Saban (who was the football coach) told him to join the football team, and he would only be allowed to play football, as basketball might take too much focus and time away. Yet, Antonio chose basketball and played on the power forward position for Kent State, averaging over 20 points per game during his senior season, but his jersey was retired after college.

Nevertheless, Gates' further ambitions in the basketball world would be hindered by his height, since he was considered too short to be a power forward in the NBA (he was only 6'4" at the time), so he decided to pursue the NFL instead. Even though Antonio never got the chance to play football in college, 19 NFL teams were still interested in him due to his athleticism and huge hands, and pegged him to play tight end. Among these NFL teams were the San Diego Chargers, who were the first ones to see him workout, and they signed Gates immediately, not even allowing him to leave the facility. 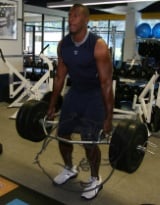 Gates showed promise during his rookie year in 2003, and went from 3rd string, to starter that same year. Then, on his 2nd year in the NFL many analysts felt like he had the potential to be a star, and he made justice to those predictions by braking out with almost 1000 yards receiving and a whopping 13 TD's (the NFL record for a tight end at the time). The secret behind such success was the fact that Antonio was too fast and athletic to be covered by a linebacker, and yet too big (6'4" 255 pounds) to be covered by a safety. Furthermore, his basketball experience allowed him to fight off the defenders, and 'box them out' in order to make room to catch the ball even in tight spaces.

As a result, Gates would have monster seasons from 2004 till 2011, making the pro bowl every single season, and being voted as a first/second All pro team 5 times (meaning he was the best tight end in the league). In fact, together with Philip Rivers, Antonio owns the record for the most touchdowns between a quarterback and tight end in NFL history. All in all, he has compiled 844 catches, 10,644 yards, with 104 touchdowns in his career.

It was announced over the summer of 2015 that Gates would be suspended for the first 4 games of the 2015 regular season for violating the NFL's PED policy. In spite of this suspension, the Chargers announced that they would continue to support him 100%, and that they were confident he would come back strong after the suspension. Nevertheless, Gates denied that he took any steroids or HGH. Instead, he blamed the violation on the holistic supplements he was taking, which he guessed had showed up as banned ingredients. However, in the end he took responsibility for not being aware of the drugs he took, and blamed the fact that he should have done more due diligence.

After returning from his suspension, Gates had a decent season, catching 56 balls with 5 TD's in just 11 games.

Speculation on what drugs he might have used is all over the internet. While there is no evidence of this, based on speculation we can take an educated guess. Generally, NFL policy is they do not announce what the player was caught using.

*Gates was likely taking Human Growth Hormone (HGH) to help him as he got older, so he could recover easier. A receiver of his size also needs to be able to block linebackers, which requires strength, while still keeping the agility. Therefore, he could be using such compounds as Cardarine GW-501516 and Equipoise, since they can boost endurance and increase strength. Doses of each steroid would be hard to guess, and I'm thinking he mostly used long esters like EQ offseason.

*DISCLAIMER: The above information is for entertainment purposes only. There is no proof Antonio Gates used steroids or HGH. All information expressed is per 1st amendment rights, this article is in compliance with all legal articles of free speech.