Ben Booker is an American fitness model, fitness trainer, and businessman who is 6 feet tall and 190 pounds lean. He overcame major alcoholism to change his life for the better. This story is for those who are struggling with alcohol, to motivate you to give it up, and replace alcoholism with a healthier addiction - fitness! 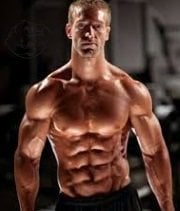 Booker loved all kinds of sports growing up, especially track, basketball, baseball, and of course football. He was known as a typical jock and sports were his life. When he was in 12th grade, he was so good that coaches thought he could play at a large college program and earn a lot of playing time for several sports. Unfortunately, due to a major injury from a car crash, his dreams were dashed, and he had to spend a lot of his senior year in bed recovering. Instead of overcoming these obstacles, Booker turned to alcohol to dull his pain.

Booker started drinking as a teenager, and, as he got older, he would drink more often. He admits he was addicted to alcohol and would turn to it to get through bad times, which made problems worse. This caused him to become very unhealthy, ruined his jobs, and strained his marriage. His life was headed in a bad direction and spiraling out of control.

It always fascinates me when I go to the gym in the late afternoon or evenings and see the bar across the street will full parking. While I am letting all my stress go via fitness, others choose a different route. Alcohol is simply a depressant, you may think you feel good and you are less stressed and have less anxiety while you drink, but in reality, you are actually causing more long-term depression. Logically, alcohol does not solve what you are depressed about.

If you are a person who drinks alcohol more than a few times a week, and especially every day, you are an alcoholic (someone who abuses alcohol). Seeking medical help isn't always the best solution because doctors will swap the alcohol for anti-depression drugs, again failing to solve the root problem. A simpler solution here is turning to fitness.

Luckily for Booker, he had a very strong wife who helped him break his addiction to alcohol and supported him. He started getting back into fitness again, and he realized that the gym was his way of relieving stress and feeling better every day. He eventually quit alcohol for good and hasn't touched it since. 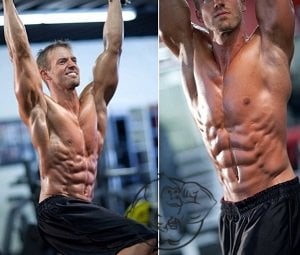 His transformation from 'out of shape guy with a beer gut', to 'ripped 8 pack abs' is inspiring to anyone in a similar situation. He was able to land sponsors, open up his own gym, and he was easily winning fitness contests on his way to being a fitness model. Not only that but his wife, who saved his life and saw his potential, has been successful in CrossFit businesses of her own, proving you are really only as strong as your other half!

Booker realized early on that he wasn't going to achieve his goals without dialing in his diet. Looking at his diet, it isn't anything particularly flashy, he is just smart about what he eats. He avoids all processed foods and sugars, especially protein bars which he hates.

This is a rough layout of his diet:

Booker has 3 exercises he thinks are needed to achieve maximum muscle growth for those particular areas. 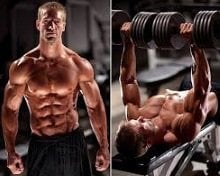 Booker believes in 60-90 second rest periods, hypertrophy training, changing workouts to keep the body guessing, and super setting. He has recently started doing a lot more strength training with super heavy weights as you will see below clicking his social media links. In addition, he believe that recovering from grueling workouts requires a lot of rest and sleep.

Booker has a video with over 200K views at bb.com chronicling his transformation and how training saved his life. You can see the entire video here:

Booker also has a growing Instagram page where he shows pictures and videos of all things training related. He also will post on occasional funny video for his fans to laugh at:  https://www.instagram.com/thebenbooker/?hl=en

Booker does a lot of things right with his training, diet, and of course, quitting alcohol. It is obvious though by his physique that PED's have helped give him a boost too. A speculative steroid cycle that he could be on is *:

Join the Evolutionary.org forums and have your say on Ben Booker Steroid Cycle!

*DISCLAIMER: The cycle above is our opinion on what Ben Booker could have used, this is for information and entertainment purposes only. There is no direct evidence that Ben Booker used steroids or any other drugs. This article is our freedom of speech.