CT Fletcher is a very strong American powerlifter, bodybuilder, and fitness celebrity who boasts a large following on social media. Part of CT's popularity is based on his humility, as he has discussed his rough life and how he had to overcome many obstacles to make it where he is. However, Fletcher is also popular because of his very inspiring and motivating videos. CT is a former three time World Bench Press Champion and three times former World Strict Curl Champion. His stats are 5'11", around 230 pounds and he was born in 1959. 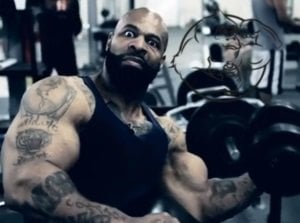 CT Fletcher was born in Arkansas - the heart of the deep south of the United States. His mother was very young, and his father was a very abusive man. When he was one year old, they moved to a very rough part of Los Angeles called "Watts" and "Compton." Both areas are known for the extremely high crime rates, gangs, and drugs. In spite of being a preacher, CT's father was extremely strict on CT and his brother, and he used discipline with severe physical abuse to get his message across. Due to all these factors, CT had a rough teenage life, and when he was 18 years old, CT joined the Army to escape everything. While in the military, CT was introduced to fitness, including karate, and with the help of Bruce Lee's motivation, he became a 2nd-degree black belt. After getting out of the army, CT worked as a mailman, got married and had a child. Interestingly, Fletcher currently has seven children in total, and he got re-married to a woman he met at the post office.

CT Fletcher got into weight lifting in the early 1980's, and it turned out that he was very talented at it – he quickly gained an incredible amount of strength and muscle. He says he would work out every day and that weight training was his life. Eventually, he started competing in bodybuilding shows and would routinely get top 3 showings. He then transitioned to powerlifting and did very well at that too.

Eating everything and killing his heart

Fletcher said that there was a time when he would eat a lot of unhealthy food because he only cared about strength. His favorite foods were fast food and lots of sugary foods. As a result, he started to develop high blood pressure and ignored the red flags into the early 2000's, which is when his doctor warned him that he was at risk for a major heart attack. Consequently, in 2005 CT had to have an open heart surgery, and he almost died during the procedure. As a matter of fact, he says his heart stopped three times, and he should have been dead. Afterward, CT ended up being hospitalized for almost six months, and after being released, he had a hard time breathing, and could not sleep at night due to his bad heart.

Therefore, CT Fletcher decided to start eating clean, and he made an amazing comeback from being almost dead to competing in bodybuilding shows and doing well. It was in 2012 when he took his return to life into the social media and used his near death experience to motivate others to be the best they can be while living a healthy lifestyle.

Interestingly, Fletcher believes in not having a training plan, and instead, he does what he feels like doing. The thing he does believe in is pushing your body hard so that it can improve. He tries to get as many reps as he can, whether it is one rep heavy maxes or 25 reps to get a crazy pump and burn. CT believes that the body will adapt and you must keep trying to trick it and change your workouts. One of the most interesting CT's workouts is to do the maximum number of reps and sets on one body part per session. In fact, he doesn't even count how many reps he does - he just does as many as he can until he can't lift anymore. In response to his critics, CT tells them that they should learn the true meaning of "Overload."

When it comes to fitness, CT Fletcher considers that food should serve a purpose to improve your body, and you should not eat food to get 'pleasure' as he calls it. CT follows a macro distribution of 50% protein, 40% carb, and 10% fat, and he divides his food into six meals per day plus 2 shakes. Interestingly, he does not eat red meat to get his proteins, so he prefers fish, turkey, eggs, and chicken. For his carbs, Fletcher loves white rice, while green veggies and salad are his favorite vegetables. Unlike many other athletes, CT does not eat fruit, so he derives his vitamins from a multi-vitamin supplement. Among other supplements that he likes are creatine and pre-workouts.

CT Fletcher enjoys putting up videos to motivate and educate his fans by using a lot of intensity. This has drawn him whopping 1.2M subscribers to his YouTube channel (https://www.youtube.com/user/CTTheTrainer/videos). In addition to that, he also has a popular Instagram page with almost 1.2M followers (https://www.instagram.com/c.t.ali.fletcher/?hl=en). Funnily, to inspire his followers on Instagram, his page shows a quote "It's Still Yo Mutha Fu*kin' Set!."

For those who are interested in Fletcher's life story, he has a video that pretty much sums up his bio and some of his history:

Up to the moment, this video has received almost 10M views. Another very popular video that got 9M+ views so far is CT's Biceps/Arm day video (https://www.youtube.com/watch?v=JHiKDa4ip_Q), where he motivates the watcher to absolutely kill their arms in a workout. However, the most viewed Fletcher's video was when he introduced a man dubbed "Da Hulk," who is an insanely huge and strong weight lifter:

In addition to all that, CT has been featured in work out videos with other fitness celebrities like Kali Muscle, Dana Linn Bailey, Mike Rashid, Furious Pete and many more, producing millions of views.

CT Fletcher has a website bearing his name called (CTfletcher.com). There he sells all kinds of apparel including socks, shirts, hoodies, and such accessories as bags, sports cups, and even a $10 towel. What's more, he also has a supplement line with the typical items like a fat burner, pre-workout, whey protein, and BCAA's. However, this website is not the only business CT Fletcher runs - he is a gym owner as well.

One of the most well-known attacks on CT Fletcher that reached 750K views on YouTube was uploaded by VeganGains. What made this attack so harsh was that VeganGains spent the first 3 minutes attacking CT's son by calling him a retard. He then spent the rest of the time criticizing CT for not believing in overtraining. The attacks were thin arguments explaining why CT was wrong about how to train.

In another video that got fewer views, CT admitted that he had used steroids in the past (for a total of just six months), but does not use them anymore (34 years without using) due to his promise to God and the fact that steroids made him crazy:

What's more, CT posted a video saying he doesn't care if people use steroids, and even if you do take them you still "gotta work yo' ass off." CT Fletcher then posted an additional video, where he said that even if he got tested for steroids, and put the test results up for all to see, people would still attack him:

A controversy that did not last long was his involvement with the "Iron Addicts Gym" bust in Miami, where the DEA raided and shut down the gym. Initial reports tied CT with this story, but it was quickly revealed that he merely owned a gym with the same name across the country in California, and they used CT's name for publicity. You can read more about this story here: https://www.evolutionary.org/miami-gym-raided-by-dea-and-fbi/

Currently, CT Fletcher denies he uses steroids, but he admits that he used them in the past. Given the fact that he is 60 years old, Fletcher has most probably reduced his old time dosages and does not use harsh steroids anymore. Therefore, we can speculate a steroid cycle * for his age would look like this:

Want to discuss CT Fletcher on our forums? click here and discuss him...

*DISCLAIMER: The cycle above is our opinion on what CT Fletcher could have used, this is for information and entertainment purposes only.