Dwayne Bowe is an extremely talented NFL wide receiver, who has had his fair share of ups and downs throughout his life.  Sadly, Bowe's father was mostly absent when he was growing up, and without a strong father's hand he spent his time hanging out with the wrong crowd in Miami, FL.  In fact, Dwayne even got involved with street gangs.  Unfortunately, it took him almost dying in a nightclub fight to realize that he had to get his life turned around.  As a result, after leaving the hospital he decided to join his high school football team, and already in his first game Dwayne returned a kickoff 101 yards for a touchdown. 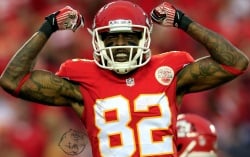 Although Bowe was a late bloomer to football, he was still highly admired by the coaching guru Nick Saban, of the Louisiana State University.  As a result, Dwayne had a sensational college career, and he even holds several school records.  Already in his sophomore year, Dwayne stepped in as a starter, and quickly became Jamarcus Russell's favorite WR.  From there on, he improved each year, and in his senior year Bowe posted a whopping 65 catches for 990 yards, and 12 touchdowns (a school record).

Right from the beginning, Bowe was considered to be a starting caliber receiver in the NFL, which is not surprising, given the fact that his 2007 predraft measurables were 6'2", 221 pounds, and he ran a 4.51 second 40 yard dash.  Hence, he wasn't known as a speed receiver, but he had plenty of size to be a possession guy, who could make a tough 10 yard catch over the middle.

Bowe was drafted late in the 1st round by the Kansas City Chiefs, who were desperate for help at the WR position.  Interestingly, he held out for 10 days while trying to negotiate a contract, angering his teammates and coaches, who were depending on him.  However, this anger would not last long because Bowe did not disappoint the team in his rookie year -  in spite of a very poor quarterback play, he managed to post a franchise record breaking rookie season, going for 1000 yards with 6 touchdowns.

The next season Bowe improved his numbers, catching 86 passes for over 1000 yards.  Nonetheless, in 2009 he had a setback year due to suspension, but followed up the next 2 seasons with stellar performance.  In 2012, his numbers started dropping and after the 2014 season he was released to sign with the Cleveland Browns for the next season, even though he struggled heavily with his on-field performance - Dwayne only caught 5 passes, and he was buried on the depth chart.  As a matter of fact, he did not even dress for many games.

Bowe has had two incidents in his career with suspensions.

The first one came late in the 2009 season when he tested positive for a diuretic.  It is not known to the full extent of what exactly occurred, but I do know that bumetanide is a diuretic that is used to mask steroid use, and this is possibly what caused Bowe to fail.  As a result, Bowe was suspended for 4 games, which essentially ruined his season.  Yet, just like in most suspensions we have seen, the player comes back the next season and has a great performance.

Bowe's second incident occurred in late 2013, when he was arrested for speeding and marijuana possession.  Due to this event he was suspended for 1 game.

Steroid and Drug Use

In no way is there evidence of this, but based on speculation we can take an educated guess. NFL policy is they do not announce what the player was caught using.  They don't list the drugs.

As mentioned above, Bowe likely took the diuretic to mask some sort of PED.  Since he is a big wide receiver, who depends on his size and strength instead of speed, there is a host of steroids he could of been trying to mask.  These include no ester trenbolone and testosterone, and it is likely that he was also on large amounts of human growth hormone.

Want to read about Dwayne Bowe and NFL on our forums? check out these threads:

DISCLAIMER: The cycle above is our opinion on what drugs Dwayne Bowe could have used, this is for information and entertainment purposes only. There is no proof Dwayne Bowe used steroids. All information expressed is per 1st amendment rights, this article is in compliance with all legal articles of free speech.