Who is Larry Scott?
Back in the day when bodybuilding was just starting to become more popular with the general public, even the best of the best were known only by true fans of the sport.  In those times, fans saw Larry Scott as the reigning “king” of bodybuilding. 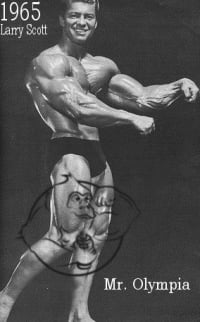 Interestingly, Scott was among the stable of athletes that Joe Weider promoted as stars and champions.  As a matter of fact, Larry Scott was the inspiration to create the Mr. Olympia contest — a competition designed to feature the men, all of whom won the highest titles in bodybuilding.  A “best of the best” showdown of sorts.

In fact, the very first show had no prize money.  It was something the athletes did for the honor and glory of being the best.  Scott, with his tremendous density and mind-blowing 21” arms, dominated the competition, and handily won the first and second venues.  After his two Mr. Olympia wins, Larry Scott went on to retire from competitive bodybuilding for good.

It was a strange coincidence that right around this time came the period where steroids were just beginning to find their way into the sport.  This resulted in a huge leap in muscularity from the bodybuilders of the previous decade, and Scott was the most impressive of them all.

What is a little striking is that Joe Weider capitalized on this phenomenon by selling to an unsuspecting public that the reason Scott and his peers made such astonishing progress was due to his training methods and supplement line!

Steroid Use by Larry Scott
Larry has been very open about the use of drugs at that time, mainly since it was so mild compared to today.  For instance, he did just 20 milligrams (mgs) of dianabol 6 weeks out from a show.  That was it, no more.

However, nowadays a lot of people under 40 have a hard time believing this kind of muscularity could be built on such low dosages of steroids.  Moreover, many of today’s steroid users fail to realize that guys like Larry Scott lived and breathed bodybuilding, and did everything possible to gain every ounce of muscle any way they could.  Besides, most probably the dianabol was a bit more potent back then, when it was all 100% human grade steroids.  Larry also attributes much of the benefits of dianabol to the increased appetite it provided, which helped him put on more size.

Furthermore, Scott was a disciple of Rheo H Blair, who was one of the first proponents of the concept of the high protein and high fat diet.  Precisely Blair was the first to make a protein supplement from whole eggs and milk, (not soy, as was commonly used) and suggested mixing it with cream. Larry insists that was the secret to mega mass.

What kind of a Bodybuilder was Larry Scott?
Apart from those ungodly arms, Larry had great thighs, which was a rarity back at the time, when legs weren’t given the same attention as today.  Look at pictures of bodybuilders form the 40’s and 50’s and you’ll see that their legs tend to be pretty ordinary.  Nevertheless, Larry’s legs were thick and cut.  His delts were also a standout — not wide, but yet full, round, and seemingly too large to fit on his frame. 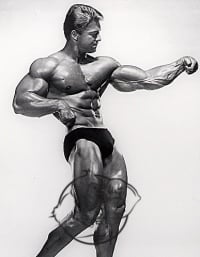 It was about 5 years after Larry retired that “Pumping Iron” was released and bodybuilding exploded in popularity with the public.  Though Larry, always the gentleman, had no regrets that he missed out on the “big payday.”  Larry loved the time he dedicated to the sport, and spent the rest of his life modestly promoting the bodybuilding lifestyle.  Moreover, he had a gym, a line of supplements and gym equipment brands.  He also conducted seminars and was glad to speak to fans — not only about himself, but of the sport in general.  He was the real deal.

Although he remained in top shape and exuberant health, Larry contracted Alzheimers disease later in life and died in 2014 at the age of 75. 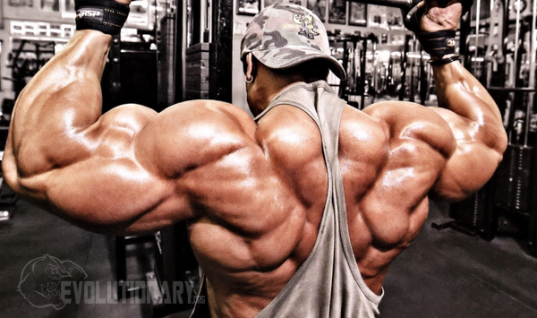