Mark Anthony Wingson is a professional physique bodybuilder and is best known for being the first ever to win that new category at Mr. Olympia. His competition stats are 5'11" and 175 pounds.

Mark was born on a tropical island north of Venezuela called Trinidad and Tobago, and he grew up in Toronto, Canada. Like most bodybuilders, Mark was a gifted athlete growing up and was drawn to weight training as a teenager, but never imagined Mr. Olympia would ever have a physique division. His father played a major role in supporting his bodybuilding lifestyle and pushed him to excel at the sport.

In 2011, Mark earned his pro card by winning the IFBB North American Class B Men's Physique division. The next year he won 1st place at the LA Pro Grand Prix, Orlando Europa, and New York Pro.

In 2013, Mr. Olympia debuted a physique class for the first time and Mark set out to win it. With the help of his coach/guru George Farah, and the backing of his good friend Jay Cutler, he became the first-ever winner of Mr. Olympia Physique . 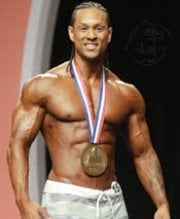 Mark set a goal to win it again in 2014, but after being part of the 'first callout group', he ultimately fell out of the top 5 in the competition and finished in 6th place. The strength of his competition was evident this time, and the eventual winner would be Jeremy Buendia.

Although Mark has not been able to replicate his 2011-2013 successes, nobody can take away the fact that he was the first ever Mr. Olympia Physique Champion. He has piggybacked that distinction with business ventures that have made him financially well off after moving to Las Vegas.

His first major venture was a Physique team called THE NEW BREED. He has a team of pro's which he trains and coaches.

He also became an ALLMAX Athlete, owns a training business called Olympia1, reps for HiTechPharma, and reps for ICONMeals. He currently travels to NPC and IFBB contests all over the country. His favorite hobbies are watching UFC, eating at top end restaurants, and attending a Christian Church on Sunday.

His Instagram page has videos, pictures, and markets his products: https://www.instagram.com/markanthonyflex/?hl=en

Mark has a video on youtube which teaches physique competitors tips on looking their best on stage:

Here is Mark backstage doing an interview during the 2013 Mr. Olympia:

Mark says he likes to workout with his headphones with great music without being bothered. This allows him to focus 100% on what he is doing.

His workouts are consistent year round. First, he will do his warmups, which include jump squats, clap jacks, crossovers, high knees, and lunges. He then likes to do 4 sets of 15+ reps on his muscle groups, and says he will reduce volume only before his competitions to prevent injury. His abs are worked out a minimum of 3X per week and include exercises like decline situps, hanging leg raises, and sprinter crunches. He will do 25 of each, with a 2-3 minute rest in between sets. 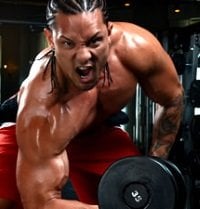 Cardio is very important with physique athletes to help them stay super lean. His workouts are extremely intense and include lots of 40-yard sprints, sled pushing 100 pounds, ladder sprints, 20 speed hurdle jumps, and 20 jump squats with resistance. A normal person would throw up after all this, but he is extremely conditioned to finish it all with no problems.

Mark says he keeps his calories at close to 5000 a day! However, he will start dropping calories as he gets closer to his competition. He eats very clean and his favorite foods are eggs, chicken, rice, sweet potato, and lots of vegetables. His favorite places to eat are buffets because he can pick the food in front of him, instead of someone making the food out of sight.

Mark is blessed with amazing genetics; however, there is no doubt he needs steroids and PEDs to get him to that next level. Here is a speculation of what he ran leading up to Mr. Olympia.

Join the Evolutionary.org forums and have your say on Mark Anthony Wingson Steroid Cycle!