Human growth hormone (also known as hgh, somatropin, nutrobal, nutropin) is a peptide hormone which stimulates growth on the cellular level. It is a protein which has endocrine functions in living animals and is synthesized in cells from amino acids.

Growth hormones stimulate cell reproduction and cell regeneration in humans and animals. In the fitness world, it is used across the spectrum as a performance enhancing drug, and in the non-fitness world it's used as an anti-aging compound. 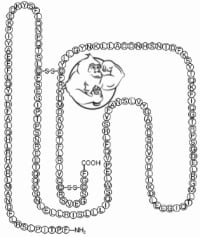 One of the main things that separates anabolic steroids from growth hormone (GH) is that GH is capable of using mitogen to help you grow. Mitogen is a chemical substance which encourages cells to grow and divide. So one cell can turn into two cells and so on. This is not the case with anabolic-androgenic steroids, which generally work on a principle of increased testosterone and decreased cortisol levels.

A historical perspective is needed. Years ago, professional bodybuilders typically weighed 80-100 pounds less than the monsters we see today, but they used a lot of steroids. Well, in the last 30 years, anabolic steroids have stayed the same. So, what changed? How did professional bodybuilders get so huge? Although some reasons for the growth are advancements in nutrition, knowledge, and workouts, the #1 reason is the abuse of human growth hormone (HGH) and insulin. It would not be possible for pros to compete against peers without the use of growth hormone; in fact, many pro's have admitted to using in excess of 20iu's per day. 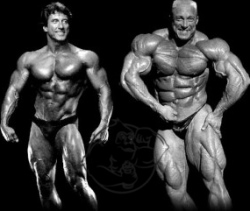 Growth Hormone (GH) is produced naturally in the body, but it starts dropping off as we age. Similar to testosterone, the amount of GH that is produced by the body will be dictated by our genetics, lifestyle, and our environment. The pituitary glands are responsible for producing growth hormone, and it has two sections: the Anterior and the Posterior. Growth hormone is secreted by the anterior part.

The best way to maintain healthy natural GH levels in the body, is to be sexually active, workout often, eat a healthy diet and sleep well.

Medically, human growth hormone is used to help children suffering from growth disorders, and to supplement adults who have growth hormone deficiencies. For example, I knew a 14 year old when I was in high school who was very short and looked very young for his age; therefore, he was prescribed HGH. In addition, it's regularly prescribed to HIV patients to help them maintain muscle mass and stay healthy. Since HGH is far more expensive than testosterone, HIV patients tend to re-sell it to bodybuilders to make a profit. As a result, a lot of the pharmaceutical HGH on the black market comes from HIV patients.

The risk of buying and how to avoid fakes

Because HGH comes in a powder form, and is so expensive, it opens a big black market for counterfeits. There are many fake HGH kits out there, many of which contain HCG instead, or some other white powder, and are sold at a high price defrauding people. One must be very careful to use a reliable source, as a single kit will run over $700 in many cases, which may last you barely a month, so this isn't cheap stuff. Professional bodybuilders will use more than a few kits per month, and the costs can run well into the thousands. For comparison, an amp of long estered testosterone can be found for 2-10 dollars, and each amp can last you a week.

Another big difference is HGH can take quite a while to show results, so it's recommended to run 2 IUs to 10IUs per day for 6 months, with pro bodybuilders running up to (and over) 20 IUs. On various forums, you will see different strategies, including '5 day on 2 day off' strategy, which merely saves the person money. In addition, I have even seen 3 times a week protocols at a higher dose each time to save on injections. How you decide to use HGH is important because it isn't something you can be impatient with, and it's crucial you make sure your source is selling you legitimate HGH.

Here are some anecdotal benefits of HGH use from bodybuilders:

Many pro athletes in every sports use HGH. The NFL did not test for HGH for a long time, but recently the NFL began a pilot HGH testing program. Though, it's logical that every player would be using some growth agent to give them an advantage. No wonder the players of today are far bigger, faster, and stronger than they were 20 years ago. Heck, just look at how they are able to recover from injuries faster.

Besides the cost and counterfeited HGH being sold, there are other issues with exogenous HGH use. From a physical standpoint these are regular side effects felt by users:

In addition, long term exogenous HGH use has been linked to organ growth. Ever see professional bodybuilders with 4% bodyfat and 8 pack abs, but their stomachs that look like beer bellies? Well, that's growth hormone abuse showing itself (growth gut). 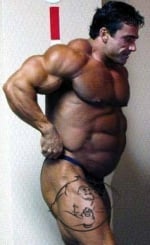 We can assume that since growth hormone multiplies cells that the use of HGH might increase the chances of cancer. Although there may not be concrete evidence to show this, we can make educated guesses that this would be possible. It is not that growth hormone will directly cause cancer, but the fact that it can accelerate the growth of cancer should probably be explored further. There are studies that link HGH use to some potential cancer growth, but they need to be explored further.

Let's stay unbiased here though, we are talking about the steroid industry. Almost anything, when abused, can cause side effects, including cancer. Try taking a full bottle of aspirin an see what happens (no need, you'll be dead!). It's just a fact of life that we need to take everything in perspective and be careful with the dosages and duration of the drugs we take.

Who should and shouldn't use HGH

It's recommended in the bodybuilding community that HGH should not be used by younger guys, and it's recommended you not use HGH until you really feel like you are ready to take that next step up. Generally, this means you're over 30 and have at least 5 years of training under your belt. Remember, anabolic steroids can give you a lot of the same benefits for a far cheaper price.

Dosing range can vary from 2IU's per day to 20iu's per day for professional bodybuilders. Duration, it's a good idea to run HGH a minimum of 6 months. A worry some users have is that growth suppression can happen, which is a good reason why guys will run a dose of T3 at 25-125mcg a day, while on growth hormone. If you really want to get large, insulin is a good idea to stack with HGH, as it aids in shuttling in nutrients into the muscles. Of course, many advanced bodybuilders will stack anabolic steroids, HGH and insulin for maximum growth potential.

Bottom line is growth hormone is still relatively unknown. Guys on the bodybuilding boards can spend months arguing about its positives and negatives, but we can all agree that it's a very advanced hormone for advanced users. In fact, it is absolutely necessary to use if you want to compete at the higher levels of bodybuilding competitions.

Want to read about HGH on our forums? check out these threads: