Who was Sergio Oliva?
Everyone knows that the very best bodybuilders usually have a genetic advantage.  However, no bodybuilder, before or ever since, has been as genetically gifted as Sergio Oliva.  Due to his incredible muscularity, with deep density and separation, Sergio Oliva dominated the bodybuilding world so strongly, that in 1968 he won the Mr. Olympia competition uncontested.  In fact, it was universally accepted that no one could beat him, so nobody even tried to do so.

At the height of his popularity, Sergio had 22 inch arms with a 29 inch waist.  His most famous pose was one where he stood with his arms straight overhead — a shot that would make any mortal look thin.  When Oliva did it, he looked inhumanly massive.  Interestingly, he was able to keep this form while eating his favorite meal of rice and beans with Coca Cola.  All in all, he was, in no uncertain terms — a freak.

Born in Cuba, Sergio Oliva worked in sugar cane fields since he was a child. In his early 20's, Sergio migrated to the states, where he was a laborer in a steel mill, working up to 12 hours a day.  As a result, it was ”after” work when he’d go to the local YMCA to play sports and do some powerlifting in order to “relax.”  Quickly, it became obvious that he had an astounding propensity to put on muscle.

Training style employed
By today's standards, Oliva had a strange style of training.  Sergio went very heavy and did just partial movements because he felt that most of the stress on the muscle occurred in the mid-range, so that’s where he mainly worked on it.  Since he did not have to do the full motion, Sergio could use maximum poundage without fear of injury.

Furthermore, he also went with the belief that training quickly and maintaining a pump helped burn fat while building muscle.  Nonetheless, his workouts would last up to two hours a session, often doing up to 20 sets per bodypart.  Apparently, the term “overtraining” was not in his vocabulary.

What steroids did Sergio Oliva use?
For most of his career, Sergio was a natural athlete, and he did not experiment with steroids until the late 60’s, which is when the popularity of the then legal anabolic steroids was spreading in the bodybuilding community.  Once again, Sergio responded in ungodly fashion.  His favorite stack was the classic old school combination of Deca Durabolin and Dianabol.  Though, the dosages may shock some modern users of anabolic steroids — just 200 milligrams (mgs) of Deca a week and 20 mgs of D-bol a day.  After less than a year, he gained another 20 pounds of muscle.  What's interesting, Sergio said he tried Winstrol, but he didn’t like it because it made him too vascular!

Sergio Oliva vs Arnold Schwarzenegger.
It was 1969 when an upcoming star Arnold Schwarzenegger arrived to compete against Sergio for the Mr. Olympia title.  As a matter of fact, Arnold was the only competitor to go against Sergio, and even posed first.  Even though Arnold looked unbeatable, he did so only until Sergio walked out on the stage.  Sergio didn’t even need to pose, since he was handed the trophy right away - he was that dominating.  However, he lost it to Arnold the following year. 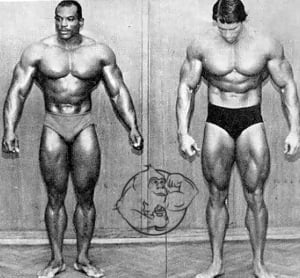 Retirement years
After retiring from bodybuilding, Sergio made a brief comeback in 1984 to compete once again in the Mr. Olympia contest.  There, at age 43 Oliva looked almost as good as he did in his heyday, but he was simply out-massed by the pool of competitors, all of whom were using huge amounts of steroids, growth hormone, and insulin.  As a result, he placed at the controversial 8th position.

Sergio continued training for the rest of his life until he died in 2012 from kidney failure at the age of 71.