Tom Brady is considered one of the greatest NFL Quarterbacks to ever play the game of American football.  This is not surprising with his incredible winning success and statistics, as well as his number of Super Bowl and playoff wins and appearances.  Interestingly, his athleticism is considered average - although he stands at 6'4" and 225 pounds, he did not impress enough at the NFL scouting combine to be considered a top prospect in the NFL draft.  Therefore, his greatest asset is his intangibles, leadership, and ambition to win at all costs, none of which will show up with athletic tests. 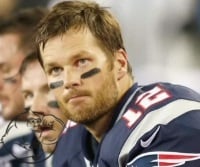 Although Tom Brady played several sports in high school, and was considered a very good baseball player, he made a decision to pursue football in college.  Nonetheless, he didn't get much of a look until the latter stages of his high school career, as he accumulated 3700 yards and 31 TD's.  Tom sent his highlights to different colleges and garnered interest from several, finally settling for Michigan, which has a traditionally excellent football program.  With Michigan being a top tier football school, Brady would have to patiently work his way from 7th string QB to the starter, and in order to keep his job, Tom would need to hold off top recruits at QB's, such as Drew Henson.

Brady's rise from forgotten backup to starter in the NFL

Surprisingly, in the 2000 NFL draft he was passed on by every single team many times, until the Patriots drafted him in the 6th round.  This was a very delicate situation, since the NFL draft only has 7 rounds, and if you are not drafted you become a free agent.  However, Tom Brady's hard work would not end there because at this time the Patriots already had a franchise QB in Drew Bledsoe, so Brady was considered someone who could challenge for a backup role, at best.  Hence, just like in college he had to work his way up, and he went from 4th string QB, to backup by his 2nd season.  Then, Drew Bledsoe suffered a severe injury, and it was Brady's turn to step in.  At first, he struggled a bit, but pretty soon the Patriots found themselves winning games, Brady was named the full time starter, and Bledsoe (their franchise QB) had to watch games from the bench.  As a result, The Patriots shocked everyone by going all the way to the 2002 Super Bowl that season, and pulling off one of the biggest upsets in sports history when they beat the 14 point favorite and very powerful Rams.  In fact, the game climaxed, as Brady led the Patriots to a game winning field goal to win.

Reversal of fortune for his team

The Patriots were 5-11 the previous season, and with Brady taking over as QB the next season went 11-5, and his team won the super bowl.  In spite of the fact that it was considered a fluke by many analysts, the Patriots would go on to have a winning record every season (as of this article in 2016) and reach 5 additional super bowls, proving that Brady was the common denominator in the Patriots' success.

In the first game of the 2008 season, Brady was hit low by a Chiefs defender, who tore the MCL and ACL in his knee.  Consequently, Tom would be out for the entire season.  Nevertheless, the very next year he won the NFL comeback player of the year award, throwing for 4400 yards and 28 touchdowns, again leading the Patriots to the playoffs.

Luckily, he has managed to stay injury free since then, missing very little time due to his ability to release the football quickly, and not take sacks or hits.  What's more, he is still playing at a pro bowl level, and still takes his team to the playoffs even at an age of 38 years.

In the 2014 AFC Championship game a controversy erupted after a Colts defender made an interception, and noticed that the ball felt like air had been let out of it.  This led to the "Deflategate" scandal, according to which Brady had ordered ball boys to let air out of the balls to give him an unfair advantage at throwing the football.  As a consequence, he was suspended by the NFL based on allegations that he destroyed his phone and lied to the commissioner.  Furthermore, the Patriots had to pay a penalty and lost draft picks.  However, Brady decided to take the matter to court where the judge said Brady could play, so he missed no time.  Thanks to this, the Patriots ended up winning the game 45-7, and winning the super bowl. 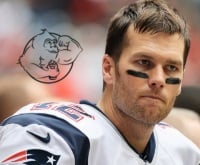 While there is no real proof that Tom Brady used steroids or HGH, there has been speculation because of his fast injury recovery during 2008.  Furthermore, his “deflategate” cheating scandals has opened him to other cheating and doping speculations.

In general, I think most NFL players are using some kind of HGH and steroids; after all, how do you compete with any of the NFL monsters without it?  He's likely doing what every other NFL player is doing, doping.

My view is that all NFL players should be legally allowed to use, 2 IUs of Human Growth Hormone (HGH) per day and 300mgs of testosterone cypionate per week to help them recover after brutal training sessions and injuries.  I know this will cause a lot of people to get angry with me, but is it a problem to level the playing field when all of them are already doping as is? Let's face it, when you get hit by a 6'4 300lbs human being at 15-20mph - that's like getting hit with a small car!  Don't forget they get hit hundreds times in their careers.

So why are steroids or HGH needed? Simply because they will help the players recover and keep playing.  Either way, all the NFL players are doing it already, so this will allow everyone to use steroids and hgh legally without hiding.  This can be done under the supervision of medical professionals.

Want to read about Tom Brady on our forums? check out these threads: