New York Yankees' third baseman Alex Rodriguez has withdrawn his lawsuit against Major League Baseball, the players union, and Commissioner Bud Selig, according to a notice of dismissal filed by the baseball star's attorneys. 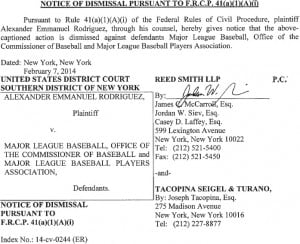 Nicknamed "A-Rod," Alexander Emmanuel "Alex" Rodriguez is the youngest player ever to hit 500 home runs and the youngest to hit 600. He surpassed the record of Sammy Sosa on September 24, 2010 when he hit two home runs to become the all-time leader in home runs by a player of Hispanic descent.

In a statement, the Major League Baseball Players Association said Alex Rodriguez has done the right thing by withdrawing his lawsuit and added his decision to move forward is in everyone's best interest. In a statement, Major League Baseball said we have been informed that Alex Rodriguez has reached the prudent decision to end all of the litigation related to the Biogenesis matter and added we believe that Mr. Rodriguez’s actions show his desire to return the focus to the play of our great game on the field and to all of the positive attributes and actions of his fellow major league players, we share that desire.

Former commissioner Fay Vincent said he thinks it is a good move for Alex Rodriguez who received the longest penalty in baseball's history related to performance enhancing drugs. Vincent said A-Rod had no chance legally, and the commissioner got his authority validated. The three-time AL MVP no longer intended to report this month to the Yankees' training camp in Tampa, according to his attorney Joseph Tacopina. By accepting his suspension, the baseball star will lose a big part of his $25 million salary though the arbitrator ruled that A-Rod is entitled to $2,868,852.46.

The 38-year-old star was suspended by the MLB for using and possessing testosterone, human growth hormone, and other prohibited substances over "multiple years" and to make attempts to cover up his violations of baseball's drug policy by obstructing an MLB investigation. Former Yankee David Cone had remarked that Rodriguez should stay away from spring training. He remarked he liked A-Rod personally but termed the whole situation involving the baseball star as "pretty ugly". Meanwhile, Yankees outfielder Brett Gardner felt the entire doping case related to Rodriguez could have been handled better by all parties. Gardner remarked he thinks it was kind of bad for everybody and added hopefully we can put that past us and look forward to a good season.

Yankees have still not indicated whether it plans to welcome Alex Rodriguez back after his suspension gets over or simply pay off his contract and release him. His extended and acrimonious fight with Major League Baseball has not gone well with the team and many believe A-Rod decided to withdrew his lawsuit fearing he may get blackballed in baseball or may be to pursue a career in television once his playing days are over.