On Feb 16, 2017, Blackstone Labs was raided by the FDA and the news was first brought to light by Marc Lobliner on his youtube page.  youtube.com/watch?v=4YbMYh9gGwI&t=1s , with subsequent updates since.   Marc and other youtube celebrities have since hypothesized that DMAA use in Blackstone's supplements was the reason for the raid.  Others have come forward since and said it wasn't DMAA related.  Who to believe?

What the heck is DMAA?

DMAA is short for 1,3-dimethylamylamine, methylhexanamine, or geranium extract.  It is touted as a natural stimulant and supplement companies have had a history of stacking it with other stimulants, creating a very potent stack.   DMAA side effects have caused problems with strained heart, shortness of breath, heart attacks, and extremely high blood pressure.  There have been cases of people dying on this compound, including the most well-known victim, a young military veteran (whose parents ended up suing after his death).   There are also many young people who became addicted to this stimulant and found themselves unable to work out without it.   The way it was popularly used was as a pre workout stimulant.

DMAA was found in over the counter supplements, the two most popular being Jack3d and OxyELITE pro, from 2008 to 2012.   In 2012, the FDA warned manufacturers MuscleMeds, Isatori, SEI Pharma, Gaspari, USP laps, and several others that DMAA was not a dietary supplement ingredient.   All stopped producing DMAA except for USPLabs who decided to fight back and they responded by claiming that DMAA was natural.  In early 2013, the FDA disagreed, and USPLabs gave up on the fight pretty quickly, and even destroyed millions of dollars of product. 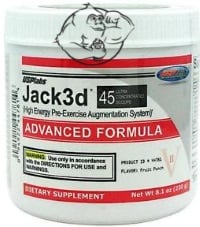 Four months later, Hi-Tech pharma (who wasn't given any warning originally) was raided and the FDA seized $2M of DMAA products.    In late 2013, Hi-Tech Pharma sued the FDA claiming that DMAA is naturally found in the geranium plant, and the case is still going back and forth even to this day.

Hi-Tech Pharma put out a press release on Feb 24th saying that the Blackstone raid had nothing to do with DMAA, and that Marc Lobliner and Ron Kramer were wrong that they were losing their battle with the FDA, to keep DMAA in their supplements.    Instead, they claim that the FDA went after Blackstone partially due to their role in the Duracap Labs steroid fiasco, where their owners were indicted for steroids, and also for the past few years of activity.   Keep in mind Duracap, back in the summer of 2016, got in big trouble for manufacturing prohormones like superdrol clones, even after the prohormone ban.

If Hi-Tech pharma is correct then it may mean that Blackstone was actually selling prohormones as SARMS in capsulated form.   And that may be what the raid was really about all along, as the investigation could have started after the prohormone ban.  As of this article, it has only been 1 week since the raid so keep an eye on evolutionary.org for updates as they come in.

Read about BlackStone Labs Raid on our forums...