Calvin Pace is an outside linebacker for the NFL team New York Jets. Coming out of college, he was considered a very talented player, but he has not lived up to those lofty standards in the NFL. Nonetheless, Calvin has proven to be a consistent pass rusher playing the stand up OLB position in a 3-4 defense.

He is a very large and strong athlete, standing at 6'4" and 265 pounds, and yet he is very quick and agile for his massive size. In fact, he was able to use his strength and speed to beat offensive blockers in order to reach the QB. Interestingly, this type of pass rushers is a hot commodity in the NFL, since it is important to not give a quarterback time to find an open receiver. 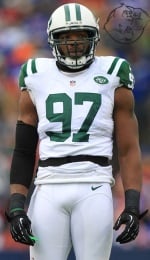 Pace was recruited from his home state of Georgia to play for Wake Forest - a university in North Carolina. There he was one of their standout defensive players as he improved each season. In fact, during his first season Calvin had 2 sacks, which became 9 sacks in the second season and 10 sacks in his junior year, and then in his senior year Calvin had 22 tackles for loss with 8 more sacks. During his career in college he had a total of 189 tackles, 29 sacks, 5 forced fumbles, and recovered 1 fumble.

When he was coming out of college, Pace was considered an athletic freak, as he ran a very fast 4.65 second 40, which is outstanding for his size. Therefore, he was widely considered to be a safe choice to come into the NFL to rush the passer as a defensive end.

The first team to take Calvin Pace was Arizona Cardinals, who picked him in the middle of the 1st round of the 2003 NFL draft, and they expected him to step in and help their pass rush on defense. In spite of these expectations, and of the fact that he did star every game his rookie year, Calvin only registered 1 sack. It was obvious that he was struggling to play that position. Overall, his first 4 seasons in the NFL were a major disappointment. As a result, the team then decided to move him to outside linebacker, which proved to be a successful decision, as Calvin Pace had a strong 2007 campaign registering 98 tackles with 6.5 sacks, plus an interception.

As mentioned above, in 2009 Pace was caught using performance enhancing drugs, and suspended for the first 4 games of the season. Interestingly, as we have seen with other NFL players, after returning from suspension they seem to perform well. Pace was not an exception, and in just 12 games he had 8 sacks, which is a pretty solid performance. Yet, Pace blamed his failed test on an over the counter supplement, which he did not disclose. He claims that it contained a banned substance that he wasn't aware of, which seems to be the common excuse for most NFL players. Pace said "I am responsible for what I put into my body," and then apologized to his teammates and fans.

There is no direct evidence of this, but based on speculation we can take an educated guess. NFL policy is they do not announce what the player was caught using.

Calvin Pace has a rare amount of size, strength, and quick burst speed. His job on passing situations is to rush the passer from the outside, and beat the offensive tackle trying to block him - typically one on one. If he can beat that player, he can consequently sack the QB or cause a hurried pass, which helps his defense. Most probably, to accomplish this Pace may have taken human growth hormone (HGH), combined with winstrol and testosterone base - unestered version of testosterone that clears out of the body extremely fast.

His steroid cycle look liked this:

Want to read about Calvin Pace and NFL on our forums? check out these threads:

DISCLAIMER: The cycle above is our opinion on what drugs Calvin Pace could have used, this is for information and entertainment purposes only.  There is no proof Calvin Pace used steroids.  All information expressed is per 1st amendment rights, this article is in compliance with all legal articles of free speech.