Who was Charles Atlas?
More than Arnold Schwarzenegger, more than Joe Weider, more anyone one else - Charles Atlas (real name Angelo Siciliano) is probably the most responsible for the popularity of bodybuilding as we know it today.

Interestingly, Atlas wasn’t the first advocate of exercise, nor was he the first “strongman” or physique star.  Actually, he was one of many “fitness instructors” promoting their methods to the masses at the time.  However, in the 1930’s exercise wasn’t a popular notion, and the “easy life” was the greater objective for the majority of people.  Therefore, manual labor was something that was done out of necessity or desperation.  In fact, many of the early “bodybuilding courses” were pitched to lower middle class men looking to build themselves up in an effort to have more chances of getting hired for jobs requiring strength, or at least looking strong.  Nonetheless, it was Charles Atlas, along with his business partner Carlie Roman, who saw the appeal of muscle as something more than just that. 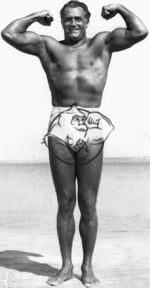 Something sexy
They put out an ad, not in magazines, but in comic books, depicting a scrawny kid getting sand kicked in his face by a bully.  Then, he buys the Atlas course, builds himself up, goes back and beats up the bully to get the girl.  It’s incredibly elemental, but it struck a chord — as did Atlas’s motto: “Nobody picks on a strong man.”  Suddenly, muscles weren’t about health or being able to do more work, they were about being attractive, admired and envied.  It resonated with the insecurity of young men looking to gain confidence.  As a result, that premise launched one of the most successful campaigns in the history of the marketing of muscle, and the birth of bodybuilding as a business.

How did Atlas’ physique compare to today’s bodybuilders?
Charles Atlas himself had a pretty impressive physique, though by today’s standards it’s nothing outstanding.  Nevertheless, keep in mind that this was long before the invention of steroids and at a time when the pursuit of muscle simply wasn’t a consideration for most people.  Yet, Atlas’ body did not go unnoticed, as he was regarded as “The World’s Most Perfectly Developed Man.”  This allowed him to model for photographers and artists, as well as many of the statues in New York City, where physical perfection was the ideal (including the “gods” at the top of Grand Central Station, The “Dawn of Glory” in Highland Park, Brooklyn, and George Washington in Washington Square Park).

What were Charles Atlas’ training methods?
Atlas also had a gimmick — he called his method “Dynamic Tension.”  Mainly, this dynamic tension approach consisted in isometric exercises, along with hard “flexing” and calisthenics, such as pushups and deep knee bends (even though Atlas himself also trained with weights).  This method was appealing because it was something that any kid could do at home without investing in additional equipment or gym memberships.  As a matter of fact, many bodybuilders today will use his methods as a “supplement” to their training, or to add “hardness” and do some extra work whenever they can.

Oddly enough, most of his course still holds true.  In this course he promoted good health practices, as well as some early “self-help” philosophy, such as “The greatest accomplishment is the development of self.”  What’s more, he was an advocate of the low carbohydrate diet long before it became fashionable.  Additionally, he instructs on the importance of concentration and focus and even “visualization” — actually “thinking” the muscles bigger while training, which was something Arnold popularized decades later.  Atlas emphasized the pursuit of “manliness” though discipline, will power, consistency and determination, no matter the objective you choose.  Again, it’s pretty straightforward, but you can’t find too much of an argument against these assumptions.  What worked then, still works now, and those tenets are the foundations of success.

Atlas exercised daily and remained healthy throughout his life.  He died being a very rich man at the age of 80.

P.S. There is no indication that Charles Atlas used anabolic steroids.  It seems he was natural and no steroids were abuse.

Written by
Nelson Montana
Nelson Montana is a classical bodybuilder and an industry expert. He was one of the first in the 1990s to write about bodybuilding. He's written for large magazines, like T-Nation and has been on multiple editorial boards. Nelson is a certified personal trainer, he has over 40 years of experience, and he's a senior bodybuilding champion, natural! He's over 60 and he looks amazing.
Have something to contribute?
LEAVE A COMMENT