Devin Physique (Zimmerman) has other people talk to his clients? TRUE OR FALSE?

Devin Physique, real name Zimmerman, is a well known social media fitness celebrity and guru. He is 27 years old, and is 5'8", and around 180 pounds. He is most known for his transformation videos and his scandals that were made popular last year. 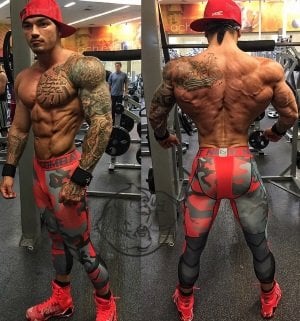 Devin is from Chino Hills, California. He grew up short and skinny, and a friend told him while he was a teenager that he looked sickly. This led to self-esteem problems, but would motivate him to get involved with fitness. He was only 115 pounds in high school and started playing endurance sports, by the time he graduated he was still skinny, and at 19 started lifting weights seriously for the first time.

Devin started to get involved with the internet in his early 20's, posting up transformation pictures and videos to help motivate himself and others. This allowed him to grow a following. He used this massive following to grow an online business selling workout and diet programs.

Devin was exposed by a former employee named Kelly Willett. She claims that she worked for him for a year, and during that time he sold over a million dollars in diet and training protocols that he had zero input on. She says it was just her talking to the clients, and he would pay her 20% of the money. You can watch the full video here:

Another scandal involved luimarco exposing him for doctoring his photo's using software like Adobe photoshop, you can watch the video here:

In fairness to Devin, most of these social media guru's do the same thing; however, it still does not make it right in my opinion. You shouldn't photo-shop your pictures if you're trying to tell the truth.

in 2016 Shredz, who sponsored Devin as a "Shredz Athlete", put out a video distancing them from him. Essentially firing him on the spot based on the scandals, you can watch the video here:

The video did not get much sympathy from watchers as it now has a 7 to 1 dislike to like ratio.

Devin's youtube channel has only 21K subscribers because it has suffered from his negative press. He hasn't posted very much in the past year and even admitted he took time away from the gym to cleanse his mind.

An example of what he posts involve food, working out, cars, and his daily life. His highest viewed video has 100K watches and has a 1 to 1 like to dislike ratio, with a lot of comments bringing up his past scandals.

His Instagram page has a lot more fans with 1.8 followers. You can check it out here: https://www.instagram.com/devinphysique/ On it he still advertises custom diet and workout plans.

Devin likes to train for long periods of times with high intensity, using music to help him focus on his workouts and not allowing anything to distract him. He also believes in keeping a nice physique year round.

Devin does not admit to using steroids. * However, when he was at his peak it was obvious that he uses PED's to help him achieve his shredded and massive look. A steroid cycle for him blasting would look like this:

Join the Evolutionary.org forums and have your say on Devin Physique (Zimmerman) Steroid Cycle!