Who is Frank Zane?

Fondly referred to as “The Chemist,” Frank Zane was also known for having what most people would consider a “perfect” body. To the layman, his classic lines, enviable V taper and razor sharp abs were the epitome of flawless manly fitness. To the hardcore bodybuilder, Zane's rock hard separation combined with flawless symmetry and no weak body parts made him the aesthetic ideal. His posing routine is a master class in form, seamless transitions and pinpoint precision.

However, the main reason for the term “Chemist” came from the fact that Frank was extremely analytical in regard to training, diet, supplementation and drug use. In fact, Frank Zane was a math professor with a Master Degree in Experimental Psychology, and he was certainly the “thinking mans” bodybuilder.

Interestingly, Zane is one of only three people who have beaten Arnold Schwarzenegger in a bodybuilding contest, and he did so at the Mr. Universe contest in 1968. He’s also the only man among the Mr. Olympia winners to list under 200 pounds. For instance, Franco Columbu was 4 inches shorter than Frank, but weighed more. Moreover, Frank Zane went on to win the Olympia three times, losing it when Schwarzenegger made a comeback in 1980. Nevertheless, many feel Arnold didn’t really deserve the win, as he was not in the shape he’d been when in top form. Overall, Zane competed for over 20 years.

Frank was known to be the first bodybuilder to realize how the thyroid was the catalyst for burning fat, and instead of using any stimulants pre-contest, he’d use Armour Thyroid — the old fashioned form of thyroid medication to boost its output and burn more fat. It is rumored that Frank's steroid stack preference was the Winstrol and Primobolan, which would make sense, since he always maintained a super dry shredded look. Frank didn’t believe in putting on more size than one’s frame can handle, and always strove for aesthetics over mass. Hence, he used just enough anabolic enhancement to polish his physique as opposed to using steroids for sheer size. This is a sample steroid cycle that he could have done: 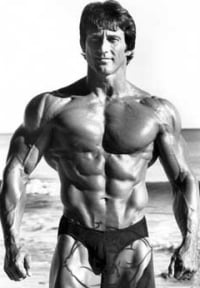 His life then and now

Although Frank Zane was one of the most popular of the Weider bodybuilding icons from the late 60’s to the early 80’s, he never went on to become a pop celebrity. Apart from his incredible body, Frank also had classic good looks, but being more of an intellectual than a showman, his personality didn’t resonate with the general public. However, in all fairness, Frank didn’t seem to want to go that route. He was more concerned with writing books about bodybuilding and running a training center with his wife Christine. As a matter of fact, she had a great fitness body, but unfortunately, this was before there were any muscle competitions for women.

Well into his 60’s Franks remains in phenomenal condition, and continues to coach newcomers and give seminars on all aspects of bodybuilding.