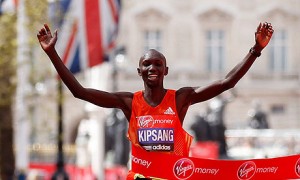 London marathon winner Wilson Kipsang Kiprotich has remarked that most of distance runners from Kenya are clean despite a recently history of positive drug tests.

The Kenyan athlete who specializes in long-distance running also remarked that more needs to be done to educate athletes. Kipsang remarked there are great measures under way now in Kenya to protect the sport. He added we have seen that many athletes don’t understand what is doping and so we are trying to create awareness and find out how they fall prey in this situation and also remarked that the ban has been increased from two years to four years, which will also act as a deterrent.

Rita Jeptoo, winner of the Boston and Chicago Marathons for the past two years, failed an out-of-competition doping test for Erythropoietin (EPO) in October and her "B" sample confirmed the positive finding. She is likely to be suspended for two years. Kenya's athletics federation will hold a hearing for Jeptoo on January 15 and the marathon runner has been asked to attend the hearing along with two coaches and her agent.

Athletics Kenya chairman Isaiah Kiplagat has remarked we since this is a delicate matter, which could decide the fate of the athlete and the country`s future, we will allow Jeptoo, her agent and even her own relatives to appear before the panel. Kiplagat added Jeptoo is the highest-profile of the Kenyan athletes to have tested positive for the banned drugs which should send a big alarm to us. Kiplagat also remarked we are hoping the hearing will shed light on who is behind this doping scam, and Jeptoo should be able to spill the beans. The 33-year-old Jeptoo is likely to be stripped of her recent titles and face a ban of two years if found guilty.

Recently, Kenyan distance runners Viola Chelangat Kimetto and Joyce Jemutai Kiplimo failed drug tests and Athletics Kenya announced that they will be banned for two years. It was also revealed by Athletics Kenya that Athletics Kenya. Kenyan government officials have blamed the growing number of doping cases on overseas agents and failure of the Athletics Kenya to educate its athletes properly.

Kipsang, a bronze medalist in the marathon at the 2012 Olympics, recently missed an out-of-competition drug test in November. According to the International Association of Athletics Federations (IAAF) rules, a missed test would be recorded against the Kenyan distance runner but there would be no sanction. Kipsang can request an administrative review of the decision. Under the Anti-doping rules, athletes are deemed to have breached doping rules if they commit a total of three “whereabouts failures” within any 18-month period. Kipsang missed the test on 13 November, according to a statement by Athletics Kenya and he was asked to provide an explanation to the IAAF that he did on November 23.