Kevin Williams is one of the most outstanding defensive tackles to play American Football during his era. He has played 13 seasons, and he rarely missed any games. Therefore, it is not surprising that Kevin Williams has numerous career highlights and awards, including being a 6 time pro bowl selection, 5 time first team all pro, and being named to the NFL 2000's All Decade Team.

On the field, he is best known as being extremely athletic for a man of his size (6'5" and 311 pounds). In fact, during his prime years playing next to Pat Williams, the Vikings were extremely difficult to run the football against, since both of these players (dubbed the Williams brothers) clogged up running lanes so well. 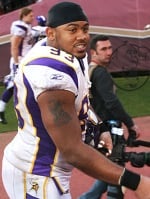 Williams was a star in college for Oklahoma State University, where he started a total of 42 games. In those games he had 160 tackles and 18.5 sacks. Hence, Kevin Williams was a big part of his team's turnaround, including a very rare bowl appearance. Thanks to his performance, it was obvious that Kevin would be a very talented professional, and he turned a lot of heads during the Senior Bowl, where scouts saw him dominate the best opposition amongst his peers. As a result, he quickly became a top 10 pick for the NFL draft.

Williams ran an incredible 4.81 second 40 yard dash, and benched 225 pounds 23 times at his NFL combine in 2003. Therefore, he was considered fast enough to play defensive end, and yet strong enough to play nose tackle too.

Interestingly, his participation in the NFL draft was quite a bizarre scene. The Vikings had the 7th pick, but their time to choose ran out. When this happens the next team gets to pick, then the next team, and so on, until the Vikings make their selection. Finally, the Vikings selected him as the 9th overall pick, and had him play both positions during his rookie year. He was an instant success, as he had over 10 sacks during each of his first 2 years.

Overall, Williams played 11 straight seasons with the Vikings as their anchor on the defensive line, making big plays and making it hard on opposing offenses. Obviously, his incredible performance on the field translated into his second mega million contract in 2006, which was worth $50M. After that, in 2014 Williams left the Vikings to play for the Seattle Seahawks in all 16 games, and helping them reach the super bowl. However, the very next year he signed with the New Orleans Saints, and amazingly at his age of 35, Kevin still had a good season with 32 tackles, and 2 forced fumbles.

In 2008, Williams was caught for using a banned diuretic called bumetanide, which can be used as a masking agent for anabolic steroids. Along with several other players (including teammate Pat Williams), Kevin had said they took an over the counter weight loss supplement called StarCaps, which was mislabeled. This became a scandal when the owner of the supplement company producing bumetanide, Nikki Haskell, was fined $60,000 after a judge decided that she had mislabeled her diet pill, not showing the inclusion of the diuretic. Meanwhile, the players were angry about this, and took the matter to court themselves to fight their suspensions. It took Kevin Williams 2 years to fight his suspension, and he had it reduced from 4 games to only 2 games (a suspension that he served in 2011 only). The NFL said that 'players are responsible for what they put in their bodies' and "claiming you used only legally available supplements will not help you in an appeal."

Speculation on what he used

It is possible that Williams simply made an honest mistake after being misled by the supplement maker. However, you could also argue that the players took the banned diuretic to purposely mask their steroid use. We will never know the truth, but what we do know is that doping in professional sports is common, and necessary as well, especially if you are to show good results and stay healthy. Since NFL players were not tested for human growth hormone until recently, and even now the tests can be passed because of the minimal detection time, Kevin Williams was most probably using HGH. Additionally, Williams could have also taken no ester testosterone and trenbolone in order to maintain his strength and size, and the use of bumetanide was just an attempt to mask these PED's.

This is a sample cycle that a football player like Kevin Williams would use in the NFL. HGH is now tested for, so I'm guessing the players pick different routes. 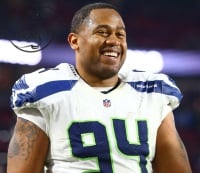 DISCLAIMER: The cycle above is our opinion on what Kevin Williams could have used, this is for information and entertainment purposes only. There is no proof Kevin Williams used steroids. All information expressed is per 1st amendment rights, this article is in compliance with all legal articles of free speech.

0 2
Previous ArticleEpisode #67Next ArticleBrailsford To Be Quizzed Over Doping